It's a cow's life 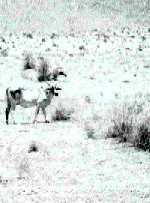 THE SPECTRE of drought hangs over western Rajasthan almost every year and this year isn't any different. The worst affected are the animals. A good monsoon last year ensured increased calving -- which means more milk -- but lack of pastures might put the clock back. Owners somehow manage to feed the milching cattle a mix of fodder and concentrate, but the other cattle are really on their own.

These "shocks" to the grazing economy are probably fairly recent. Although famines are nothing new, it is only in the past 20 years that life has become particularly hard for the animals. Population pressure has left little land for grazing. Even croplands that used to produce grass have been denuded by deep tractor ploughing. Earlier, when land was tilled with camel ploughs, good harvests depended on the rains, in the absence of which the land would be good at least for grazing.

Another factor that has led to the desperate situation is deteriorating breed quality. As herd sizes shrink and more expensive to maintain, the first to suffer are the male calves. Since the farmer can't maintain the bull, he brands it regardless of its reproductive genetic potential and sets it loose. This relieves him of the responsibility of feeding it. And the consequent lack of control over breeding ensures that the Rathi -- the best breed available in the region -- is gradually converted into a desi cow.


The third change is the advent of the panchayati raj, the emergence of the State and the withering away of traditional village institutions, particularly those that administered common property like water and land. In Kubia, people recount how the gochar (common grazing land) was managed, with no single family having the right to graze more than a specified number of animals. In Sabaniya, as recently as two years ago, the entire village would gather on the amavas (no moon night) to clean the johad (pond) voluntarily.

Now, state services have diminished any sense of community ownership. What has become of Kubiya's gochar is symptomatic. Some of it has been occupied; every year the fences of the common pastures are driven inwards by illegally expanding private holdings. Everybody's property means nobody's property and the first victim has been self-sufficiency. The vast majority of villages now depend either on residual crops from individual farms or the market.

The government has responded to this by subsidising transport instead of subsidising the growing fodder. The string attached is that the government also stipulates a ceiling price if the subsidy is availed of. The operation has fallen flat as market prices are higher than prices set by the government. The worst affected now are those who failed to stock up in advance. This year, the villages of Rajpuria and Nathusar have found a way out. They have now moved to the grasslands of Jaisalmer where sevan -- the grass best suited to this area -- is ready for harvest. The villagers are working round the clock, cutting and storing the grass before the onset of the summer dust storms. They will then transport it back to their villages where the rate for sevanis high enough to cover their entire costs -- a simple but effective idea.

But this might last only for a couple of years: the grasslands of Jaisalmer are being rapidly colonised by the government under the Indira Gandhi Nahar Pariyojna. Soon enough, the grass will disappear, like it has in Lunkaransar and Bikaner.

Sanjay Ghose is associated with URMUL, the Rural Health Research and Development Trust at Bikaner, Rajasthan.