Most of us regard the Egyptian pyramids as architectural masterpieces. Justifiably so: the monuments are among the world's finest heritage. But then how many of us know the fate of the workers engaged in building these final resting places for the Egyptian pharaohs? It's scarcely known that stone mining, hand grinding and carving required in building the pyramids led to many workers getting silicosis. The affliction was revealed after an examination of mummies in the pyramids. Silicosis is one of the oldest of occupational diseases. It is an incurable lung disease caused by inhaling dust containing crystalline silica.

Nobody knows the exact number of people who fell prey to it in ancient Egypt. But we do know that silicosis claims thousands of lives every yearacross the world. Crystalline silica (in the form of quartz or crystobolite) is classified by the International Agency for Research on Cancer as a Group 1 human lung carcinogen. Silica is also found in sand, many rocks such as granite, sandstone, flinted slate, and in some coal and metallic ores.
Jharkhand's East Singhbhum district is one of the places ravaged by silicosis. Particularly affected are Terenga, Purnapani and Kendadih villages, where 20 people have died in the past four years. The villagers blame their woes on a silica dust-producing plant, K K Minerals and K K Sales. Some former employees are struggling for their lives.

The factory was set up in 1997 along the Rakha-Musaboni road in violation of Central Pollution Control Board guidelines. It is about 200 m from Terenga and Purnapani and 1 km from Kendadih. The owner initially did not install dust collector/controller equipment. When he did install it, he never ran the equipment to save electricity. Proper safety items like gloves and boot were not supplied to workers. Of course the factory owner took care 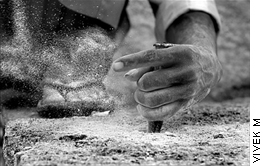 to provide these when government officials visited the plant. But the equipment was of such poor quality that it couldn't be used for more than seven days at a stretch. The workers also do not use masks provided by the company because they get layered with dust within an hour of wearing them.

It is evident that the unit is violating the Factories Act, 1948. Among other provisions, the Act stipulates that factories maintain hazardous substances below prescribed threshold values, disclose information about health hazards to workers, maintain health records of employees and constitute a safety committee with equal representation of workers and managers.

In September this year, East Singhbum's deputy commissioner said there were grounds to incriminate the manufaturer for silicosis deaths. He said a report on the company showed it was violating environmental norms. The deputy commissioner added that the matter would be investigated by a team of officials. Action would be taken if it was found that the unit was set up in violation of norms, and the families of the deceased would get justice, he said.

But on October 9, The Telegraph, Calcutta, reported that the company had resumed production without informing the district administration. The article quotes Mosaboni's block development officer: "Murali Krishnan [a doctor] probed the matter and submitted his report to the then civil surgeon S S Birua, confirming that there were at least seven deaths by various lung diseases including silicosis." But the report quotes district civil surgeon S K Ravi expressing ignorance about these deaths, though he has been in East Singhbhum for one and a half years.

East Singhbhum is not alone. An informal study in Jharkhand has demonstrated high mortality rates. How many deaths will it take for officials to admit the existence of silicosis?