The Right to Environment was not initially guaranteed by the Constitution as a fundamental right. Indira Gandhi's otherwise infamous 42 nd Amendment made it a constitutional expectation (Article 48-A). After the emergency, the Supreme Court of India converted this expectation into a guaranteed "collective" right for all people in India as part of their 'life and liberty' right (Article 21).

Since the Mussoorie Hills case (1985-1989), the supreme court has moved like a juggernaut to create gigantic powers for itself, causing both excitement and fear.It reworked the Mussoorie quarries, stopped mining in Sariska, the Aravalis and other sanctuaries, gave orders to close down mining in Kudremukh, Panna and elsewhere, switched public transport in Delhi to cng, ordered plans to clean the Yamuna, shifted industry out of Delhi, sealed shops in Delhi and pronounced that the rivers of India be interlinked in a proposal that cries to the moon. A people's judiciary may have become a dictatorship in many environment matters.

The innovative side of environment cases is sustained on the use of three techniques (i) the rule of locus being relaxed as to invite all people to bring their grievances to the court, (ii) an investigative power to find facts and (iii) an oversight and control power known as the continuing mandamus power by which the court has virtually delegated its powers to committees, which people hold in fear. The court has then, proceeded to allow these giants it created to act as its policing agency. One of these is the Environment Pollution (Prevention and Control) Authority (epcs). The other is the 'shut down' committee on adverse land use in Delhi, which has thrown shopkeepers, traders and residents into shock. The most powerful of them all is the Central Empowered Committee (cec) in the forest cases.

The supreme court insists on who cec members should be, even if the government wants someone else. cec consists of self-styled environmentalists and an environment bureaucrats whose word and views (along with that of a buddy on the committee) effectively overrule his own minister's. The committee has an agenda of its own. In the Vedanta matter it has done corporate restructuring. In the Maruti Coal Washeries, it contradicted its own report. Alongwith the amicus, it suggested a tax called the Net Present Value which the court has levied, in clear violation of the Constitution--taxes cannot be imposed without the authority of the legislature (Article 265).

cec's reports are confirmed by the supreme court at fast track hearings on crowded Friday afternoons. At these hearings, the affected parties dare not speak too often or too long. Democracy is being short changed, judicial processes are being undermined and the rule of law is being unwritten.

Each time an electric or a telephone cable has to be laid in a forest, cec steps in. The supreme court affirms what the cec says and the amicus proposes, with minor adjustments; while industry, miners and others shuffle around through lawyers for small favour from the court. In the forest case in which the cec was born, around five thousand or so applications (if not more) have been processed. Many projects (large and small) have been stopped--some because they are in violation of the law; some are violative of what cec thinks.

To be sure, there are massive violations of the environment, but can the supreme court with its cec strike force really deal with each one of them? This 'continuing mandamus' approval of the supreme court which has resulted in a takeover of the administration's task to make policy and take day-to-day decisions, is not just a violation of separation of powers but actually absurd. 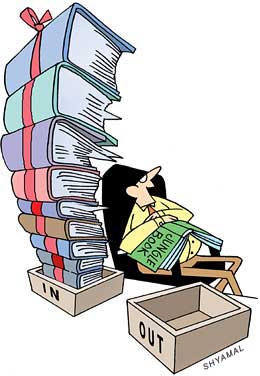 The forest case has continued for 12 years. It should be brought to an end. The court should convene a bench to settle (a) what is a forest (b) whether it can levy an onerous tax and (c) the permissible limit the court wants to lay down for the forest and the environment. Let us have one judgment and a statement of law once and for all. My proposal is to scrap giant committees which have assumed powers which should not have been given to them and to whom the Supreme Court should never have abandoned its own power.

Meanwhile Mr Harish Salve, the amicus curiae is chuckling away--but not all the way to the bank. In fact, he loses lots of time and money. He is assisting the court pro bono --free of charge. But he is having a ball.