The fast-expanding brick industry (in Kerala) is causing irreversible damage to paddy-fields in a state that is already beset by an acute rice shortage. 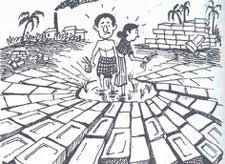 IMMEDIATELY after the monsoon, most of the paddy-fields in central Kerala are prepared -- not for cultivation, but for brick making! Brick-making has been gaining momentum during the last 15 years because it is easy money. From about one hectare of paddy-field leased from farmers, a brick manufacturer can rake in a whopping annual profit of more than two lakh rupees. And, because the brick manufacturer can afford to pay more, most of the women who used to work in paddy-fields have switched to the brick industry.

Raw materials for brick-making are available cheaply -- water from the river, clay from the leased field and fuel wood from pest-affected coconut palms. As the labourers are daily wage-earners and are not registered, there are no strikes, unlike in other conventional industries.
Because of the spurt in the brick industry, Kerala's traditional tile and pottery industries face a bleak future mainly because the available clay is gobbled up by brick-makers. Tile factories enjoying state subsidy and reduced tax rates are coming up in central Kerala, but they end up producing bricks and glazed tiles because these are in demand.

Changes in Kerala lifestyles have altered traditional homes. Earlier, houses were usually made of mud or laterite stone and topped with coconut thatching or tiles. The Gulf boom in particular and the white-collar culture which began in the 1970s have popularised brick-and-concrete houses. As a result, the brick industry is expanding so fast, labourers from as far away as Thanjavur, in Tamil Nadu, are being recruited to meet the demand. Labourers from Tamil Nadu leave some of their family members behind to look after their own fields after the monsoon, while they migrate to Kerala to work in brick factories.

Most of the paddy-fields in central Kerala are located along the spur hills of the Western Ghats, which were once thick with vegetation and crisscrossed with rivulets. Excess water from these hills would flow into the paddy-fields, which functioned as natural reservoirs. But these hills have been badly affected by encroachment, illegal tree-felling and the establishment of plantations of rubber and coconut and by the construction of roads, bridges and shopping and housing complexes. All of these have reduced and fragmented vast stretches of paddy-fields.

The situation has been made worse by the brick industry, which utilises fertile fields for five to ten years and then abandons them. By then, the land has been peeled away so much, it may be several metres below sea level and impossible to return to farming. Another problem created by brick-making for small farmers is that if their holdings are surrounded by fields leased to factories, their access to river water is blocked, at times forcing them to vacate.

Even after the green revolution and intensive farming techniques that enable three crops a year, Kerala is facing an acute shortage of rice. The state's residents literally wait for railway wagons to bring food to them from the north. Last year, the state government launched a Rs 100-crore, intensive agriculture programme to increase rice production. One only hopes it isn't too late and ecologically destructive land use patterns have not ruined agriculture to the core.