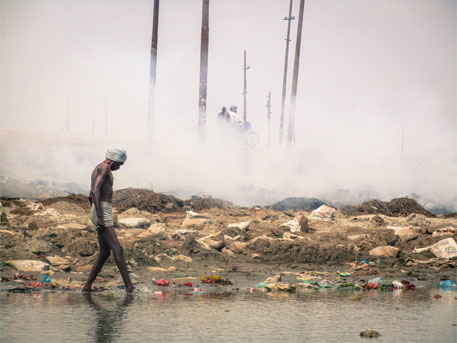 Cosmic alignment and karmic faith in one of the oldest practised religion had set the stage for the biggest show in recorded human history. Juggernaut arrangements by authorities and unprecedented outpour of the faithful and the curious flooded the cyber spaces with ash smeared nudity and surreal vibrance. The world watched spellbound as the mystical drama played out. Came March 12, marking the end of the auspicious arrangements. The shutterbugs flew away and amnesia set in. Both Sangam (confluence of the Ganga and the Yamuna) and Allahabad, the city that hosted the Kumbh, rapidly slipped from popular imagination into oblivion.

It would have remained so had not a bunch of researchers from the prestigious Harvard University, who had lived the 55 days of festivities with pilgrims, decided to hold a grand celebration of the mega success of the event. Tens of thousands had toiled endlessly to provide for the millions of pilgrims who thronged the ghats of the Sangam. For a change, Ganga flowed and its water quality became the major national concern warranting personal monitoring by no person less than the prime minister of India. No one knows the exact number of attendees but it is safe to put the estimate somewhere in the range of 100-200 million. With just three dozen dead at a stampede, it surely was a crushing organisational success. But let’s not overwhelm ourselves with the magnitude of the event again, and return to its resurrection in popular media thanks to Harvard.

The chief minister of Uttar Pradesh, Akhilesh Yadav, was flown to USA to revisit Kumbh and share his success mantra. I also happened to travel back to Allahabad a week prior, my hometown and proud host of yet another Kumbh. Being a local boy, I was prepared for the deluge of waste in the city post the largest human congregation in the world. What I was not prepared for, however, was the complete absence of any cleaning up.

The holiest of holy sites which looked picturesque not so long ago, had turned into post-apocalypse sadness. Lined with heaps of garbage, bubbling cesspools of filth and burning solid waste, Sangam had turned into a scavenging ground. Teaming with men and boys paddling and digging in what were once the shiny ghats for coins and precious offerings. Ganga had shrunk visibly to less than its quarter and with factories upstream running full blast pouring their guts out, everything was back to business as usual. No godmen threatening to go on hunger strike and no prime minister concerned with the river’s water quality.  Discontinuation of fogging of the city with insecticides coupled with widespread garbage and cesspools has fast turned Allahabad into a hot bed for vector breeding. Residents are left to struggle with the sorry state of affairs.

Harvard chose to describe the event as a big fat Indian wedding, but even in weddings people don’t go on their honeymoon before cleaning up the house. Pictures of the unholy aftermath started appearing in media a few day before Akhilesh’s much hyped lecture. Pictures were mailed to organizers at Harvard. People were starting to take notice and ask uncomfortable but real questions. The extended frisking of Azam Khan, senior cabinet ministry of UP and member of Akhilesh’s entourage, at Boston airport (which recently had suffered terror bombing during that annual Boston Marathon), offered the perfect cover-up to boycott the lecture and avoid the pinching ground reality.

Jawed Usmani, the chief secretary of UP, who replaced a brooding Akhilesh at the Harvard lecture, has just returned from the US. He made a quick visit to Allahabad and made a quick inspection of Sangam site. Official machinery has been pulled up and an immediate clean-up of the area has been entrusted to the Allahabad Municipal Corporation. Latest news is that 350 sanitation workers are employed for the job. One can just pray that this late but much-needed action doesn’t fall victim to another stroke of amnesia.

On January 11 while packing up to catch my Allahabad bound train to attend the much-hyped inauguration of Maha Kumbh, I described my feelings as one precariously poised between excitement and horror.  It has now been almost two months since the human sea ebbed from Allahabad and my predictions of the Kumbh's aftermath have been proved right. This proposed clean-up can solve some short term problems of health and sanitation. But unless the full ecological consequences of such a mega undertaking are not fully understood and planned for, the karma of Kumbh will keep returning to haunt Allahabad's residents.
Sangam Post Kumbh clean-up Maha Kumbh Harvard University Ganga pollution Down to earth Chief secretary … Azam Khan Akhilesh Yadav's …
Donate Now