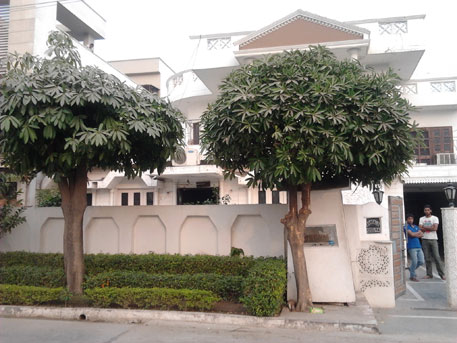 It was all there on the Rajasthan Renewable Energy Corporation (RREC) website—names of companies, addresses and phone numbers. But calling them up did not work. We were to find out the reason later. I am talking about the companies that Lanco Infratech used as fronts to get hold of more solar capacity than it was allowed under JNNSM, acronym for Jawaharlal Nehru National Solar Mission. We wanted to know more about these companies. You can find more details in the current issue of Down To Earth  this write-up is to show what we discovered about these companies.

Right, so when our tele-investigation yielded no results, we decided to hit the ground. Remember we already had the addresses from the RREC website. Our plan was to visit all the seven companies: DDE Renewable Energy in Faridabad, Saidham Overseas in Gurgaon, Finehope Allied Engineering Pvt Ltd in south Delhi, Vasavi Solar Power and Khaya Solar Projects in Hyderabad, Electromech Maritech in Pune and Nice Infracon in Delhi.

The DDE Renewable Energy office in Faridabad turned out to be a luxury villa. Residents of the villa knew little about solar power. They did know about Delhi Development Engineers, another company with the same director as per the records of the Ministry of Corporate Affairs. But that company was into making piping for power plants.

The second stop, the address for Saidham Overseas, was a small corporate office located close behind the Trident and Oberoi hotels in Gurgaon. The office was, however, getting refurbished and the entire inner blocks in the building were readying for a makeover. No sign indicating that it was the property of Saidham Overseas. Talking to the guards helped. While they were not aware of the name of the company they were sure it was not Saidham Overseas. We probed the guard further. He told us there used to be some export company a year ago at that site, but it had moved to 415 Udyog Vihar. After discovering two fictitious companies in a row, the visit to 415 Udyog Vihar was uneventful—we found a regular unrelated company there. Incidentally, we passed Lanco’s corporate office at 397 Udyog Vihar and Lanco’s headquarters at 404/405 Udyog Vihar.

Saidham Overseas, though, has had multiple addresses before as we found out from the corporate records with the Ministry of Corporate Affairs. One was at the International Trade Centre in central Delhi and the other at Neb Sarai in south Delhi. As expected, no one knew of these companies and the companies did not exist at either of the addresses mentioned in the records—in the case of the International Trade Centre, the address was not even valid. Clearly, there was no evidence of a company that had won a government contract worth hundreds of crores of rupees.

At two down, and five more to go, our excitement was growing. Finehope Allied Engineering Pvt Ltd turned out to be Allied Energy Systems. Some lead here! We spoke to Bhuwaneshwar Sharma, the vice president of Allied Energy Systems. “We also make thermal power plant equipment in our factory in Alwar in Rajasthan and deal in operation and maintenance of thermal power plants. We supply to Lanco and other groups like Siemens.” But where was he building the PV plant for which his company had won the bid? “It is a small project, just say it is in Rajasthan.” He was unwilling, unable rather, to state its exact location.

In Hyderabad, one of our team mates visited Vasavi Power Services office, which lay at the address given for Vasavi Solar Power in Hyderabad. When asked about the solar project, Tulsidas, general manager for technical services, only stated that the project had been given to Lanco. He would not say anything more about the deal. Vasavi Power Services, though, has worked earlier as a technology provider for Lanco Kondapalli thermal power plant. At the Khaya Solar Project site, the corporate office of Lanco Kondapalli thermal power plant was located.

Electromech Maritech in Pune does not exist either. Electromech Material Handling Systems does. But its officials were too busy to talk to a motley group of reporters and researchers. Back to Delhi, Nice Infracon, the company with the majority stake in DDE Renewable Energy, is officially located in Sham Nagar. We found a chartered accountant there instead. He had no knowledge of Nice Infracon or any of its directors. He was based in Sham Nagar for over a year—longer than the age of Nice Infracon.