Lift your head from the sand 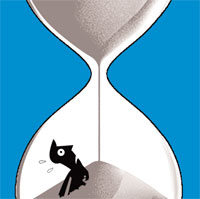 The outrage over the suspension of an official, Durga Shakti Nagpal, for simply doing her job—check illegal sand mining in the rivers of Uttar Pradesh—has highlighted a crucial issue. It is now evident that illegal mining of sand from rivers and beaches is rampant and the underbelly of this industry (I’m calling it industry for want of a better word) is powerful and connected. Worse still, all this is happening in violation of the orders of the apex court of the country. Before this brouhaha dies down we need to discuss and resolve the way to control this business, which is operated at small scales in scattered locations and managed by local goons and thugs. It is not an industry that makes for easy regulation.

But regulation is a must. Sand removal has always been done to de-silt rivers and channelise the flow. But never in this rapacious manner—the river is literally wiped clean from the bottom. As a result, the crucial recharge zone—think of it as a sponge that holds water and slowly seeps it out into the surrounding for use—is destroyed. The river is hollowed out, its ecology disturbed and fish habitats damaged. Removal of sand, therefore, needs to be assessed for environmental damage, restricted and carefully regulated.

But sand has slipped through the cracks in the regulatory system for many years. All till construction industry boomed and extraction shot up. Sand, gravel and stone are the raw material that drive this sector, which is registering a 10 per cent growth annually. We do not realise that the concrete house we build is two parts of sand, four parts of stone and gravel and only one part of cement. Not surprisingly, there are no estimates of the amount of this natural material required. Everyone plans for cement but forgets it is only a binder. The river pays the cost.

Sand is classified as a minor mineral, which means state governments are allowed to set rules and auction this resource. The Environmental Impact Assessment (EIA) rules do not categorise minerals as minor or major; they just stipulate that environmental clearance is needed only for mining leases over 5 hectares. So sand mining was thriving unchecked.

In February 2012, while listening to the case of auction of leases in rivers across Haryana, the Supreme Court set the matter right. It asked state governments to amend rules to regulate mining of minor minerals and to ensure environmental management. Till this was done, it directed, all minor minerals would require environmental clearance from the Ministry of Environment and Forests (MoEF). By May 2012, MoEF had washed its hands of the responsibility by devolving it to the state environment impact assessment authorities (SEIA).

Two issues further complicated this decision. One, back in 2000 the Ministry of Mines had classified “ordinary earth” as minor mineral. This meant all earth needed for road construction and brick kilns would come under the ambit of this decision. Two, EIA rules stipulate that if any activity is within 10 km of a notified sanctuary or national park then the environmental clearance will be given by the Central government. The states passed the buck back to MoEF in many cases.

Nobody made the effort to put in place a system for clearance of the scattered, small leases. So either mining continues as before—only this time with the stamp of clearance from SEIA—or it moves to the illegal dark side. A few months ago, all members of the Maharashtra SEIA resigned in protest against the lack of controls over sand mining and pressure on them to clear leases at all costs.

What needs to be done? First, illegal mining must be stopped. It is for this reason that the Nagpal case is so critical.

Second, rules for legal and regulated mining of such minerals should be treated as critical. Plan the mining areas as clusters. Give clearance to certain minimum plot sizes and, most importantly, do cumulative and regional-level environmental impact assessments to estimate the hydro-geology of the stretch and the amount of sand that can be extracted from it sustainably. These extraction zones should be geo-referenced and carefully monitored. But again, all this will remain on paper if enforcement is not strengthened and officials are not allowed to do their work.

Thirdly, we need alternatives for sand and other natural aggregates in construction. If concrete is the second most consumed material after water—as is said—and Indians still use much less than global average, then we will only need more. If our rivers are already crying for help, think of what will happen when more houses, flyovers, roads and malls are built. Now when I see a building, I think of a river. We need new solutions.

But the standard laid down by the Bureau of Indian Standards, used compulsorily in all construction, stipulates that concrete can be made only with “naturally accessed material”. This rules out the use of recycled material such as copper slag and construction waste, which is widely used in other parts of the world for aggregates.

This will have to change. Otherwise there will be no rivers but sand, only sand.

Constitution of a Committee to enquire into the adverse environmental impact of the alleged illegal sand mining in Gautam Budh Nagar, Uttar Pradesh