Polio eradication targets strike a wrong note, while the WHO waxes eloquent 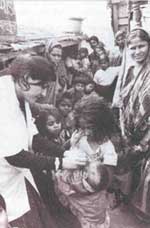 THIS year, the World Health Organization (who) set apart April 7 as World Health Day to highlight the international campaign for polio eradication and to provide necessary momentum to it for an envisaged polio-free world. But even while the who director-general, Hiroshi Nakajima, in his message on the occasion, called for "supplies of good quality vaccine and training of personnel", 11 children died in the state of West Bengal after they were administered expired polio vaccine in the course of the polio eradication week.

Also, 38 siblings below the age of 1 were hospitalised after the April 4 tragedy at the government primary health centre at Debogram in Nadia district during the campaign to end the use of calipers and crutches. No wonder irate villagers attacked the health centre, damaged government vehicles and blocked the national highway to give vent to their outrage.

who's Towards Target 2000 -- Polio Eradication Progress Report, released on April 7, points out that the South and North Americas had been declared polio-free in September 1994 and that the western Pacific region was about to become the second polio-free region in the world. The who singles out China for praise for its mass immunisation programme -- which has lowered the number of polio cases by 97 per cent in 5 years -- in which about 83 million children received the polio vaccine at one go.

Since the Indian subcontinent is worst affected by the disease, accounting for more than 50 per cent of the 100,000 polio cases reported worldwide, "polio eradication for the Southeast Asian region is particularly significant," acknowledges Uton Muchtar Rafei, who regional director for Southeast Asia. "What is now needed is a firm commitment at the highest level to ensure that the target of polio eradication by 2000 is successfully met with."

However, the Nadia tragedy is an indicator of how the government and un agencies are trying to promote global targets without taking into consideration the capacities of the regional healthcare systems to deliver the goods. While it is easy for the who and funding agencies to set health targets, developing nations with fragile healthcare systems need great determination and application, besides monetary support, to realise the targets set before them.

Primary health centres in West Bengal, as in many other parts of the country, have virtually collapsed due to lack of funds and infrastructure. The authorities persist in using even defunct health centres for immunisation programmes in their eagerness to meet the specified targets, turning a blind eye to the hazards such steps entail. The moot question at the moment is whether the existing healthcare set-up in the country is capable of immunising the nation without creating fresh health hazards.

While health workers are assigned the onerous task of realising tall targets in their areas, many of them lack adequate training and equipment to ascertain whether the vaccines are safe enough for children. The worst malady that straddles the healthcare system in India is the general laxity in enforcing mandatory safeguards. Reports say the Nadia tragedy is the 18th vaccine-related mishap in West Bengal alone.

In view of the minimal state subsidy for the health sector under the market economy prescription, the private sector and non-governmental groups are expected to shoulder part of the burden to make immunisation programmes successful. However, ngos seem more interested in greener pastures, which is amply illustrated by the recent mushrooming of action groups embarking on AIDS awareness programmes from conference tables to street-corners.

In the Nadia case, the families of the dead and the affected will certainly have to wage protracted legal battles for the compensation which is their due. The who, in all probability, will plead innocence if the prosecutors list it among the accused. The who Southeast Asia information officer has described the incident as an "aberration" in the organization's campaign for a polio-free world, saying that "it should not deter us from pursuing the target of complete eradication of polio by 2000."

The singleminded pursuit of certain immunisation programmes in the country, with an eye to meet international targets, often ignores larger pressing health concerns. While the polio eradication programme does get its share of attention and publicity, other basic health concerns like diarrhoea, cholera, hepatitis and malaria, which take a heavy toll of life every year, get low priority because the who is yet to launch global eradication programmes to combat these ailments.

Anto Akkara is a freelance writer.