Loneliness in the glitzy capital 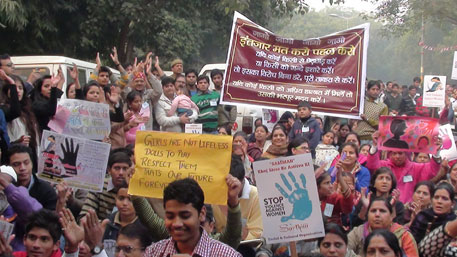 As I write this piece, thousands of young men and women are protesting in the country’s capital. I understand their rage. But I cannot empathise with their demand. I cannot support death penalty, even for a brutal crime like rape.

However I cannot, as some of my friends, dismiss the protests on the streets as another example of effete middle-class activism. I cannot because like the protestors I am outraged at what happened to a young woman on last Sunday. I don’t know her. I can’t even recollect her name. But that young woman could have been anyone I know: a friend, a colleague, a young cousin. That’s why I can’t remain impervious to the protests even though I am vehemently against their form of vigilante justice.

I also agree with some of my friends who think that what happened on that terrible Sunday night has fundamentally to do with horribly patriarchal societies in India. I am aware that the so-called blissful Indian family is a myth. Terrible things happen in homes that go unmentioned, and the victims carry on bearing the scars.

It would be naïve to expect that the brutal ways in which societies in India treat women will not spill over to the streets. But one does not have to be a feminist to demand that women  move about in streets and use public transport without any injury to their dignity. Women’s mobility is basic to democracy. How can one attach the suffix “public” to public place or public transport if women are at risk there, or they feel hindered?

That’s where we have gone wrong. Delhi’s city plan—perhaps that of many other Indian cities, the layout of many of our localities, and our sorry attitude towards public transport open up the possibilities of violence to spill over to the streets. Delhi has miles and miles of roads designed exclusively for cars—another matter that at most times of the day cars crawl on these roads. Human beings on these roads are almost always inside a vehicle, mostly cars. Streets where people meet, talk, sit, play, eat, hold hands, gallivant and feel part of a community are getting rarer by the day. Bazaars where people rub shoulders, street corners where one can buy food and household goods, roadside shops with their wares displayed outside have been ringed in by huge swathes meant for cars.

There is something terribly forbidding if you happen to be on foot at night in such an ocean of vehicle headlights. Even at the best of times, it’s harrowing for a pedestrian to be caught in an arena meant for the machismo of fast car driving. Why only pedestrians, many of us in cars would not find it pleasant to be on such roads. Such dehumanised spaces invite violence. It’s not surprising that Delhi’s roads have seen several incidents of violence towards women in the past few years.

According to newspaper reports, the young woman many of us are so concerned about was brutalised on one such a road. She was returning home after watching a film at a theatre in a mall. Today most cinema theatres, many businesses and eating-places are enclosed in malls. Life teems in the neon glitz of such emporia of modern business, but you are likely to step out in a lonesome road designed for cars. The young woman brutalised last Sunday would very likely have encountered such a contrast while leaving for home after watching a film. Yes, it was a cold and foggy winter night. But while the mall bustled with the celebratory mood of the festive season, the road barely a kilometre ahead would have seemed lonesome and, as it turned out, sinister.

Many women, and men, experience such contrasts everyday as they step out of their offices late evening. Many use public transport to get back home. Many do not prefer using such transport despite not having a personal vehicle. Most do not even have that choice: there is either no public transport or they find public transport unfriendly. Till some years ago, Delhi Transport Corporation ran a nominal fleet of women’s special buses. Today, when the number of working-women is on the rise, women’s special buses seem to have vanished, even from the agenda of those championing public transport. I don't think it figured in the list of demands of the young protestors.

We are back to the lonesome—and louche—road then. It has become somewhat of a zero sum game. Lest I be mistaken, this is not a call for increased surveillance. In fact, even as I write this there are reports that ID cards are to be mandatory on public transport. You do not have to be a rocket scientist to say that such measures will be counter productive. Increased surveillance will make our public spaces even more restricted. And in any case, our law enforcers are not really the top-of-the-heap in matters of gender sensitivity. Don't expect much from a cadre schooled in morality that sees threats to public order from two people holding hands.

I know that the terrible, terrible way Indian society treats women will not change merely by having more public places. But I do think that more and more public places are in the interest of a democratic society, as opposed to a society that privileges males and masculinity. I also think that no public place or public utility can be worth its name if women feel threatened in it.