Looking forward to the past 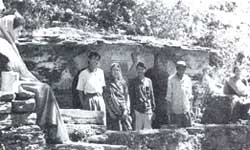 TWO steps forward, one step backward. That's the irritating pattern of growth I've been seeing in the past 2 decades in villages within 3 km from the motor road to Kumaon. But even this hobbled dance of development seemed to take on a progressive avatar after a 15-km trek to an obscure hamlet called Kwetta. It was deep down in a valley off the Almora-Shaharphatak road, outside the 3-km limit where things still happen.

Lack of accessibility has made ghost villages of habitats that are, theoretically, a tantalising walking distance from modernity. The term "walking distance", of course, has to be used flexibly -- rare visitors like me often decide that their first visit is going to be their last. But even the local people complain that the 7-km uphill trek kills all initiative. They can't possibly carry all their produce on their heads, as is the practice in the hills, to cater to the demands of the market.
The block development officer, who makes half-hearted attempts to promote new cultivation techniques in areas around the road, ignores villages like Kwetta. It is a cosy conspiracy of inertia, for the villagers, too, find it easy to take refuge behind the fatalism typical of the Indian peasant. They feel fatalism is better than setting their hearts on newfangled schemes that will invariably fail.

Potato, paddy and wheat are grown in the village, mostly for personal consumption. Narain, part-time performer and part-time farmer, feels that potato is the wrong crop for the region. "We grow it only because it's the fashion in Shaharphatak. Our climate is much hotter than in the rest of the hills and we could grow (other) vegetables. But we don't know where to sell, or how."

He is one of the few dynamic villagers. He has put together a wedding band of 8 persons from neighbouring villages, which charges about Rs 1,200 per wedding and manages to perform at 25-30 weddings in a year. Of course, the logistical problems of coordination and maintenance of instruments are overwhelming. But what's the choice?
All over the country, it is the landless who migrate in search of greener pastures. But in Kwetta, it is the landed Brahmins who move out in despair: their 12 or 14 nalis of land cannot sustain them. Says Keshav Dutt, 40, a daily wager, "The Gram Sabha meets only once in 2 or 3 years. What is there to discuss?"

But there is no dearth of issues: illegal tree felling by contractors in liaison with politicians (how else would an aspiring leader get the money to fight elections?); employment generation for the youth, all of whom tend to study at least up to the 5th class, girls included.

Or electricity. Two years ago, the electricity department finally put up poles in the area. But it did not generate a spark of interest in even one of the 40 families in the hamlet. Says Keshav, 16, who was wandering around with a blaring transistor radio, "It would have cost Rs 800 to take a connection. That's more than we spend on kerosene oil lamps in a year." Besides, villagers also use the bark of pine trees for lighting up the hovels.

Later, the electricity department even removed the poles it had installed. One step forward, 2 step back.