Reforms in India have become synonymous with opening up to foreign capital. Does it reform our corrupt polity or institutions?

Reforms in India have become synonymous with opening up to foreign capital. Does it reform our corrupt polity or institutions?

Why is there so much drivel written and said about reforms in India? It’s not just opportunistic politicians who beat the reform drum—or still it—when it’s expedient. Economists, bureaucrats and all hold forth on the need for reforms and why the lack of it is holding back our economic growth. Then there is the media which goes into excess of headlines, pontification and downright inanity on the issues of reforms. And it’s not just the pink press that goes into raptures; every mainstream newspaper, including staid dailies given to protecting secular values, is prone to see reforms where none clearly exist.

Remember the media’s last feeding frenzy on reforms? There was absolute hysteria in September when the government decided to open up multi-brand retail and civil aviation to varying degrees of foreign direct investment (FDI). There were huge headlines, tedious analyses and foolhardy projections on the impact of these measures on growth. This was repeated but more mutedly in October when Manmohan Singh’s muddled and unpredictable Cabinet lifted the cap on FDI in insurance companies and opened the pension sector to foreign investors for the first time.

All this we are given to understand is reforms. Just what the good doctor thinks is needed for an ailing economy. Not that Manmohan Singh, economist that he is, is calling it reforms. Very prudently he terms it “some important economic policy decisions”. That was how he described the September gamble in his address to the nation where he attempted to justify the FDI liberalisation as part of “the responsibility of the government to defend the national interest, and protect the long-term future of our people”. It was pretty difficult to get the logic of this spiel specially since lack of FDI has not been our problem. In fact, FDI inflows spiked to a record $46.8 billion in 2011-12, increasing by over a third from the previous year. The previous years, too, have seen such funds increase. Did anyone raise this point?

The rest of the prime minister’s justifications made as little sense. Rapid growth, he said, is necessary to raise revenues to finance programmes in education, health care, housing and rural employment. So whatever happened to education, health care and housing and rural employment during the boom years of our economic growth? Anyone interested? As soon as the “reform” euphoria had worn off newspapers were back to reporting their staple fare: scams related to every kind of natural resource misappropriation and political scandals of the worst kind involving sleaze money that businessmen have paid politicians of every hue. Crony capitalism and the collusive corruption of politicians, businessmen, bureaucrats and the media joining to make the most of a free market economy was fully revealed by the Niira Radia tapes last year. The scandals tumbling out thick and fast are egregious examples of the same malaise. Surely, we all recognise what needs to be reformed urgently? Is it an economy that is already flush with funds? 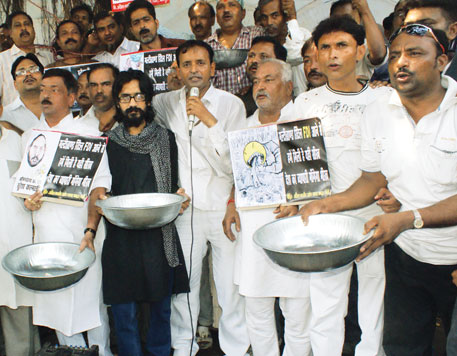 A clue to what reforms entail comes from Manmohan Singh himself. At a recent conference of the Central Bureau of Investigation and state anti-corruption bureaus, the prime minister did nothing to put these institutions which have a far from an unsullied reputation on their toes. Instead, he bewailed the “mindless atmosphere of negativity and pessimism that is sought to be created over the issue of corruption”. Instead of doing us no good, “it can only damage our nation’s image and hit at the morale of the executive.”

But what is interesting is his analysis of the nature of corruption that is choking the country. I will, therefore, reproduce his speech at some length so that his reasoning becomes clear. “The nature of the challenges that our country’s anti-corruption agencies face varies with the level of economic development,” he says. “These challenges get even more complicated if the pace of economic development is rapid, as it has been in our country in the last two decades or so... The economic reforms initiated in the early 1990s greatly reduced many of the old forms of corrupt practices, associated with controls and the license-permit raj. They resulted in faster economic growth and new areas of economic activity. This in turn led to newer opportunities for corruption, ones associated with specialisation and expansion of our economy. As our economy grows and becomes more integrated with the evolving global economy, the big challenge before our anti-corruption agencies is to keep pace with these rapid developments.”

Manmohan Singh was the finance minister who initiated the economic reforms of the 1990s, mainly to set right what he called the structural faults of the Indian economy. So is this unprecedented corruption the price that is paid even if the structural faults have not been corrected? And a price that the country’s hapless people will continue to pay while the crony capitalists make a killing?