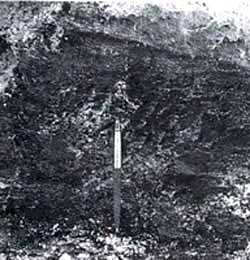 MEGHALAYA faces a new threat: the wholesale degradation of its air, soil and water by coal mining. It is damaging the greenscape through indiscriminate felling, excavations, tunnelling and the dumping of debris. In blind pursuit of black gold, mine operators ignore the essential harmony of the environment and continue to accelerate the pace of mutilating terrain by quarrying wider and deeper into forests and cultivable land.

Mining in Meghalaya started with Captain Lister, a British political agent, who first worked out coal in the Khasi hills in 1840. Coal mining has since continued -- in a desultory manner. But the recent steep hike in the demand and price of coal has spurred extraction intolerably -- from 39,000 tonnes in 1970 to 1.7 million tonnes in 1989.

The proximity here of the seam to the ground makes extraction cost-effective and highly rewarding. The coal can be mined easily by the "rat-hole" method, which requires neither modern technology nor trained personnel: all it involves is selecting a site and chopping the trees on it. A 20-50 metre pit is then dug till the coal seam is reached. The "overburden" (material overlying the seam) is removed from the pit and dumped on adjacent land, creating what is known as "mine spoil".

Coal mining is changing the physical structure of the land, spoiling soil quality, threatening the biota and affecting human life for the worse. Since the overburden is removed from the pits unscientifically, the most fertile humus layer gets dumped at the bottom and gravel and coal particles on the exposed surface. The mine spoil also becomes toxic with heavy metal ions, making the survival of any kind of life impossible. During the monsoons, the water that accumulates in the pits turns highly acidic and toxic. This, along with the run-off water from mine spoils, poisons drinking water sources and enters agricultural fields, playing havoc with crop yields. The environmental deterioration due to coal mining is directly proportional to the rate of extraction.

An important factor in this runaway mining is that most of the coal land is in private hands. Coal mining is far more rewarding financially and less labour intensive than agriculture. The landholders argue that coal mining is "an important economic activity" and justify it in terms of revenue and employment.

But do these benefits outweigh the cost of devastating the environment? The landholders find it ridiculous to translate the cost of environmental degradation into purely monetary terms. However, T M Das of Calcutta University has estimated the cost of felling a 50-year old tree that weighs about 50 tonnes: the services derived from one tree -- oxygen, erosion control, soil fertility, water recycling, air pollution control, the sheltering of life in various forms, timber, fruits and flowers -- add up to as much as Rs 20 lakh.

The second factor which accelerates the extraction rate is market demand and a continuing hike in coal prices. Also, an often ignored factor that provides impetus to more extraction is the Indian industry's dependence on coal for energy. Since coal is a non-renewable resource, the push to replace it with renewable energy sources has to come from technological development.

Mining is against nature
The profit per unit land from coal mining is also far greater than that from agriculture. But landholders fail to realise that agricultural returns are environmentally friendly and renewable, whereas mining returns vanish with the coal.

The state's negligence toward regulating mining in an organised manner has also boosted extraction. Since most coal deposits are small, isolated and regulated by private operators, the government prefers to stand aside, deeming it uneconomical to invest in organised and scientific mining. As a result, landholders start coal mining as a cottage industry, taking it for granted that mining is a customary right independent of environmental obligations.

How is Meghalaya to be saved from the hazards of coal mining? The problem has two important dimensions: not only has the physical and biological structure of the landscape been mutilated, but the attitude of the landholders has undergone a sea change. Recent research at the Northeast Hill University indicates that the physical and biological structure of the soil can be restored through scientific and organised mining. The systematic replacement of topsoil and backfilling the pits is suggested as the most economical remedy.

However, tackling the attitudinal change of voracious landholders is an altogether different ballgame. Neither biologists nor social scientists can offer a magic solution. The onus of building landholders' confidence about alternative remedies, therefore, lies with committed volunteers.