Coal politics in an unequal world

Australia is a coal country. It is big business—miners are important in politics and black gold exports dominate the country’s finances. But dirty and polluting coal evokes emotions in environmentally concerned people. Coal-based power provides 40 per cent of the world’s electricity and emits one-third of global carbon dioxide, which is pushing the world to climate change. 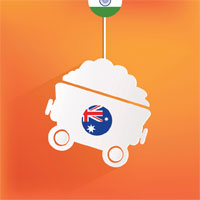 Given this, on my recent visit to Australia, it was obvious I would be asked about my opinion on Australian coal exports to India. My answer, at the end of a discussion on the environmental challenges the world faces, was that as long as Australia was addicted to coal for energy it would be hypocritical for it to ask countries like India to give up coal. It is also important to note that Australia’s per capita carbon dioxide emissions are the highest—18 tonnes per person per year, compared to India’s 1.5 tonnes per person per year.

This position is not acceptable to anti-coal campaigners, so I have been scolded in email after email for betraying the cause. Anti-coal groups, largely led by big US NGOs, are on a warpath to stop the use of coal in our part of the world, as they believe we can make the transition to cleaner energy sources like solar and wind. We should not make the mistakes of the rich world; we should not add to the climate change problem because we want cheaper energy from coal. Furthermore, they argue that the real cost of coal is very high in terms of health and environment.

And efforts to stigmatise coal have been successful. Anti-coal groups have bullied the World Bank into agreeing that it would not fund coal-based power in developing countries. Last week, US President Barack Obama became their star campaigner as he persuaded his Dutch counterpart, Prime Minister Mark Rutte, to join the US-led effort to end public financing of coal-fired plants abroad.

What is my position as an Indian environmentalist? We do believe that coal mining will destroy forests, water sources and livelihoods of the poorest. We have pushed policy to recognise this, take careful and cautious decisions on clearance of coal mines and, most importantly, to heed the voices of communities when they protest mining in their backyard. This, we recognise, will reduce the availability of domestic coal and will increase the cost of energy as plants depend on imported coal.

In addition, we want stringent standards on pollutants from coal, including mercury. We also want all industries, including coal thermal plants, to pay for the real cost of raw material, including water. All this will make coal-based thermal power more responsive to environmental safeguards and local concerns and make clean fuels more competitive.

Having said this, I do not accept the assumption that countries like India, with huge unmet power needs, can make a transition to renewables so that we replace coal in the short run. Currently, coal accounts for over 65 per cent of India’s power generation. India needs to massively increase its power generation and make sure that the cost is affordable to the poor. In all this, it is clear that we need to aggressively push renewables, particularly with the objective of energy access, so that the current energy poor move to clean sources of power. But we must also recognise that this will be expensive. The objective is to do what the rest of world has not: reach the poor, not rich, with relatively more expensive power. But even after doing all this and more, it is also a fact that India will remain dependent on coal for the coming years.

So, why do I say it is hypocritical to ask India not to use coal? The fact is that coal is still the mainstay of energy production in most parts of the rich world. The only countries, which have weaned themselves away from coal, are those that use nuclear on a large scale (like Sweden and France) or those with natural gas (like the US and large parts of Europe). The hard inconvenient truth is that the US President is an anti-coal campaigner because his country has now options of large finds of shale gas. It is gas versus coal, not climate concerns versus coal. It is now convenient for him to be green and to preach to the world.

The fact also is that shale and natural gas are not necessarily clean or green. Gas is also a fossil fuel, and even though its carbon dioxide emissions are lower than that of coal, there is huge uncertainty about methane emissions from gas. Therefore, transition to gas from coal is not even an intermediate solution to countries, which should be reducing their total emissions in the interest of climate change. While countries like India need atmospheric space to grow, countries like the US and Australia and even Europe have exhausted their claim to the common atmospheric space. They have to make the transition, not to shale, but to solar. Not tomorrow but today.

But this is not what global NGOs are screaming about. The rich have not reduced their carbon footprint by reducing consumption. As yet, it is only a game of switching from dirty to not-so-dirty fuels. In this view, the poor in the world have to take on the burden of climate change by moving to renewables and reducing consumption. This is the definition of justice in the rich man’s world.