The bogey of green clearances 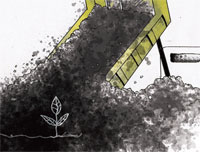 The environment is holding up growth and economic development. This is the common refrain in circles that matter. So when the Group of Ministers tasked to resolve the issue of coal mining in forests asked for a report on what needs to be done, it was told that the best would be to dismantle green conditions, almost completely.

The B K Chaturvedi committee recommends that all coal mining projects should be given automatic clearance, with exceptions only for projects in “dense” areas. There is no definition of “dense”, of course, or an understanding of the importance of forests for water and livelihood. Then the committee wants all those provisions that seek to protect the rights of people or the environment to be relaxed. It recommends that the gram sabha, required to give consent to the project, should be held without a quorum. In other words, democracy should be sidelined. Similarly, public hearings should be done away with when it comes to expansion of the current mines. It also recommends that even in areas identified critically polluted new projects should be allowed without check. It has no time to waste on such minor considerations as the health of the people who live in these regions. The horrendous cumulative impacts of these massive projects must be ignored, because we are a nation in a hurry, it says.

This report reflects the general mood. It is for this reason the proposed manufacturing policy, which seeks to create massive areas as national investment manufacturing zones, wants none of these inconvenient green checks. It wants to take away all powers of the environment and forest clearances from the Centre and state agencies and hand them over to the project proponent.

But are green clearances holding up projects? My colleagues spent days poring over the Union Ministry of Environment and Forests’ publicly available database to seek answers. What they found should make us wonder why there is such a hue and cry about the environment as an impediment to growth. In fact, the reverse is true: green clearances are certainly failing to safeguard the environment. This is what should concern us. Make us angry.

First, it should be understood that the scale and pace of green clearances have been unprecedented in the past five years. In fact, the pace doubled, with 203,576 hectares (ha) of forestland diverted for mining and industrial projects in the past five years. Coal mining accounted for more than half the forestland diverted, and as many as 113 coal mining projects were cleared—the highest in a five-year plan since 1981.

Secondly, clearances when added together overshoot the current and future targets. Take power projects. The 11th Five Year Plan targets 50,000 MW of additional thermal power capacity to be created till 2012. In the 12th plan the proposal is to add another 100,000 MW. This is what needs to be built and set up till 2017. Now consider this: in the past five years, till August 2011, the Union Ministry of Environment and Forests has granted clearances for an astounding 210,000 MW of thermal power capacity, that is 60,000 MW more than what has been proposed till 2017. Now also consider the fact that the thermal power capacity built in the past five years was a mere 32,394 MW. What is going on? Why are new projects asking for clearances when the old, cleared projects are still not being built? Is this a land-water-coal scam, given that each project sits on valuable natural resources? Or is it all about getting the licence to pollute?

Take the cement industry. At the end of the 10th plan, India’s installed capacity was 179 million tonnes per annum (MTPA). During the 11th plan, green clearances have been given to an additional 190 million tonnes per annum, which takes the combined capacity to 369 MTPA, far beyond what is operational or what is proposed as the target for this period. This is true for virtually all the industrial sectors we analysed.

There is another layer of misinformation. Coal shortage is being cited as the reason for underperformance of the energy sector, which, in turn, is leading to a strident call to open up more forested regions for digging. The fact is Coal India Limited (CIL) produces over 90 per cent of India’s coal; it controls over 200,000 ha of mine lease, including 55,000 ha of forest area. The estimated coal reserves with CIL are 64 billion tonnes, and the company produces 500 million tonnes per annum. Who is then responsible for the shortage of coal in the country?

What is clear, instead, is that in this haste to give clearances, it is the environment that is being short-changed. Most mining districts of the country have become a living hell. More are emerging as the hotbeds of thermal, mining and industrial projects, and nobody wants to fix the horrendous environmental fallout of this growth.

What needs to be done? In my view, environmental regulations should be strengthened, not weakened. Growth managers must look for other reasons they are failing in pushing up industry numbers. More importantly, environmentalists must see how the regulatory regime can be worked better. This is the agenda that matters.