In many ways, the 102nd session of the Indian Science Congress in Mumbai was unlike others I have attended. For one, the theme of the conference “science and technology for human development” coincides with the new government’s overall agenda of development. The call for “Make in India” too made its mark at the meeting in the form of astall by the Pride of India exhibition and a symposium was also dedicated to it. The general president of the congress, S B Nimse, held a panel discussion on the focal theme to develop a set of recommendations to the government.  These efforts were to an extent baby steps but they seem to be in the right direction.

For years researchers and scientists in the country have lamented the fact that the government does not pay them the respect they and their findings deserve. They now have a opportunity to make their voices heard and the scientists already seemed more confident. And they were opinionated, too. However, some of the opinions were quite unsavoury and illogical. To what extent their suggestions and opinions are reflected in the overall governance is yet to be seen, but it is an interesting development to keep an eye on. 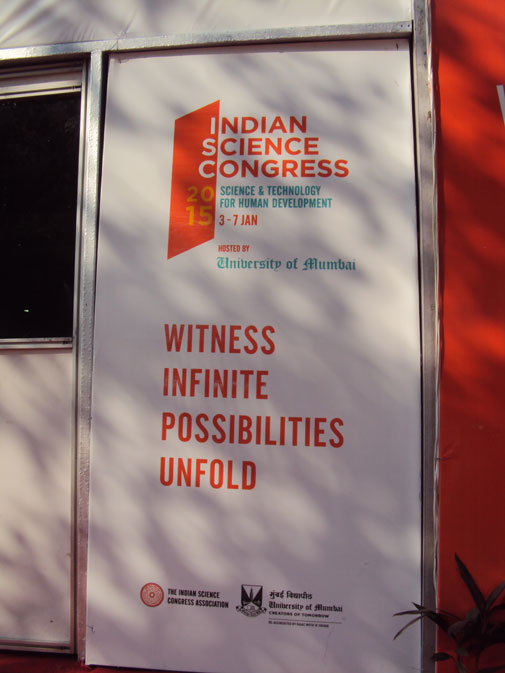 The congress also brought in a session and an exhibition that took the media by frenzy. For the first time in 102 years of its existence, the congress hosted a symposium on ancient sciences through Sanskrit. The controversial claim that Indians had manufactured airplanes in ancient times was presented here. There were petitions filed against the inclusion of such papers in a science meeting. This again is a development worth watching.  The meeting was convened by the Kavikuaguru Kalidasa Sanskrit University and was inaugurated by the Union Minister of Environment, Forest and Climate Change Prakash Javdekar. The intent of the symposium seems benign. The vice chancellor of the Sanskrit university, Uma Vaidya accepted that science had moved much ahead of what was in the texts but she reiterated that these were the “foundation of new theories, however insipid may seem”. By building a bridge between science and Sanskrit texts, she hoped that the language might be given its due status.

The congress also had a symposium on archaeology which too talked about the importance of integration between archaeology, history and languages. The session had a talk on how there were links between Americas and India in ancient times. Botanical evidences in the form of carvings in temples seem to suggest that many of the plants, like maize, believed to have been brought in by the Europeans were actually already there in India. This is still a mystery that needs to be solved.

Interdisciplinary research has often been talked about at the science congress. But this kind of linking of the old and the new, history and languages is indeed a first of the Indian science congress.  It is too early to actually say how this will work out but at least it is a change from the boring, predictable sessions. By the way, the rest of the sessions were, more or less, business as usual.