More to junk food than meets the eye 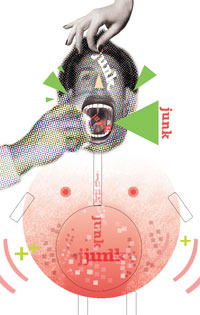 Junk food is junk by its very definition. But how bad is it and what is it that companies do not tell people about this food? This is what the Centre for Science and Environment (CSE) laboratory checked. The results were both predictable and alarming. What was equally predictable was the response of big food companies and their spokespersons—denials and dismissals. But they are missing the point.

First the study: CSE tested all that is readily available in fast food outlets or as branded and packaged items in shops across the country. These ranged from instant noodles, chips and Indian bhujia to the ubiquitous colas, chicken fries and burgers.

As I said, the results were partly predictable. Junk food is defined as food with empty calories—it provides fat, sugar and salt, without nutrition. The CSE study reconfirmed this but with a difference. Labels on packages do not explain just how much of our daily salt, sugar or fat quota this “fun” food is taking up. We are not told that one packet of chips, devoured easily, supplies half of what we should take daily in terms of fat and salt; one bottle of cola has twice the daily added sugar allowance of adults and children. It is not in the interest of food companies to advertise this. It is in our interest to know.

The study also found that companies were not just irresponsible through omission, but also through deliberate misrepresentation of facts about the quantity of trans fatty acids—trans fats in short—in their products. Trans fats, formed during hydrogenation of oil, are linked to serious health problems. But the Indian law does not require companies to declare the quantity of trans fat in their products. However, it does say that a company can make a “health” claim that its food item is trans fat-free, provided that each serving has less than 0.2 gm of it.

There are many operative misses in this regulation. Companies can determine their own size of serving and they do. Indian food giant Haldiram’s, for instance, takes 10 gm, which is less than a mouthful, as the serving size. That’s how it claims to be trans fat-free. Haldiram’s bhujia, Pepsi Lays’ chips and ITC’s Bingo chips had trans fat when they claimed otherwise. The rest of the junk food, which was not even pretending to be trans fat-free, was equally bad or worse. Companies can get away with this because nobody is checking.

Take the case of Pepsi. It went on an advertising spree, saying its potato chips were healthy because they did not have trans fat and were cooked in rice bran oil. Filmstar Saif Ali Khan was its brand ambassador, urging children and adults to eat without guilt and care. The chips were branded “snack-smart”, implying good. Then Pepsi decided that these chips were heavy on its pocket. So it changed the medium of cooking and removed the snack-smart logo and the declaration of zero-trans fat from the packets. But this time it did not launch an advertising campaign. Why should it?

The CSE study found the company was adding insult to injury. First, even what was claimed to be trans fat-free had 0.9 gm per 100 gm. Secondly, packets of chips manufactured in February 2012 had dangerously high trans fat levels of 3.7 gm per 100 gm—much more than what is allowed in daily diet. But under the weak Indian food regulations they did not have to tell people what was in the packet. It is no surprise then that Pepsi, in its official rebuttal to the CSE study, said, “All products are fully compliant with regulations, including those on labeling.” Clearly, food companies are not in the business of food, but in the business of profit.

Following the CSE tests two questions were raised. One, why should one test junk food when it is already known to be bad? Two, why test only packaged food when all Indian snacks are said to be equally bad?

First, as the study shows, we do not know just how bad this food really is. We should know more because it is critical we take informed decisions about our health. Non-communicable diseases, from hypertension to cancer, are a global epidemic. Bad food and bad lifestyle are major causes of these diseases. Indians are especially vulnerable when it comes to diabetes; as compared to Caucasians, they are genetically disposed to have more fat than muscle and have a greater propensity to put fat around the abdomen. They are also too poor to cope with the horrendous health costs of debilitating diseases like diabetes. Therefore, Indian food regulations have to be even more stringent in limiting quantities of salt, sugar and fat in food.

Secondly, regarding food other than junk it must be made clear that traditional and local diets are built on the principle of moderation and balance. Indian diet, with its diversity of regional cuisines, celebrates good food. Problem arises when one adds “new” food and makes it universal—“McDonalise” it or “supersize” it. Therefore, the right thing to do is not to pit junk food against Indian snacks but to consider how much and what you eat. The choice is yours to make. So eat at your own risk.