In a recent breakthrough, an Indian mushroom has been found to be extremely effective in controlling heavy metal pollution 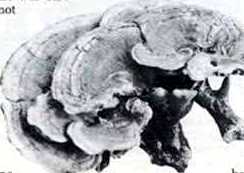 WHEN a ten year old boy in a remote Kerala village was spraying the Bordeaux Mixture, a concoction of lime and copper sulphate used as a fungicide, on jackfruit trees to protect it from wood-rotting mushrooms, he did it with all the care one could expect from a 10-year-old. Yet the parasitic mushrooms did not die. His uncle thought he was careless. The boy, of course, knew that he was not at fault. But then, why did the mushrooms refuse to die?

Fifteen years later, as a postgraduate student of environmental engineering at the Indian Institute of Technology (IIT), Kanpur, he started work on biosorption, a process where absorbents of biological origin -- mostly fungal -- are used to extract heavy metals in industrial effluents. The first thing to flash through his mind was those resilient mushrooms of his boyhood that had refused to wilt. Acting on the hunch, he chose to work with the adamant species.


After a couple of trips to Kerala and 2 months of intense research, he established that the mushroom -- identified as Ganoderma lucidum -- is among the best biosorbents reported from anywhere in the world. The breakthrough happened in the environmental engineering laboratory of IIT Kanpur, where a research group headed by Dr Venkobachar was conducting studies on the metal uptake capacity of indigenous mushrooms and their use in controlling pollution in effluents from metal plating, rare earth processing and nuclear fuel processing industries.

Heavy metal pollution is one of the major concerns in environmental toxicology. Even when present in trace quantities, these metals can accumulate in the human body over a period of years, leading to acute and chronic problems. One of the recent developments to control heavy metal pollution is biosorption. It was in IIT Kanpur that a researcher stumbled upon the discovery mentioned earlier. The group has never looked back since.

G lucidum, a wood-rotting fungi found all over India, is known for its extra resistance against fungicides. In the process developed at IIT Kanpur, the mushroom is detached from the rotting wood using a knife and is then dried and pulverised. The preparation of the biosorbent is very simple and inexpensive and a patent has been applied for the process.

The biggest advantage of this biosorbent is that the treated metal could be recovered by simple techniques and the biosorbent could be reused. In a study conducted at the department of nuclear engineering in IIT Kanpur, S K Bhargava established that this material could be used to absorb radioactive thorium from its dilute solutions.

While Venkobachar is flooded with requests from abroad for more information and collaboration on the process, the government attitude has been typical. A project proposal submitted to the department of environment in 1989 for a comprehensive screening of tropical mushrooms and a prototype development of the process employing actual industrial effluents is still under review. Two of the students who worked on this project have already left India for greener pastures. If steps are not taken immediately, the project might end up being just another case of our knowledge on biodiversity being siphoned off to the West.

As for myself, the little boy who failed to kill the mushrooms, I am no longer in scientific research, fully realising the futility of attempting to sell air coolers to Eskimos.