Need for an overhaul

Scientific research and organisation must be completely re-oriented to a more balanced development of the planet. 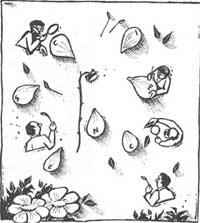 Whichever way we look at the future, nobody can deny that today's world is in deep crisis. The central task must be to provide adequate living conditions for a growing world population that restores and maintains a sustainable relationship with nature. This is not only a moral imperative but a question of global security. If we do not succeed in raising the standard of living of the poor, populations will continue to grow, resulting in mass migrations and increasing pressure on the global ecosystem. The question is: What is the role of scientific research in this?

Issues at stake for science are manifold. It must bring about a more just distribution of resources for research and a re-direction of research priorities between rich and poor countries; promote research organisations complementary to traditional disciplines, and focus more on developing clean and sustainable forms of production instead of polluting ones.

All of us know the important role of science and education in development. The difference in the number of scientists and technicians in the developing world and in the industrialised countries is shocking. There are almost 100 professionals per thousand persons in the North, whereas the ratio is less than 10 per thousand in the South. The has resulted in a desperate lack of capacity in most developing countries. It will be very difficult for any government to bring about real development without having to rely on indigenous expertise. Foreign experts do help, but to depend entirely on them means self-reliance is not possible.
When funds for research come from the North, it follows that research priorities are dominated by Northern interests. Health is an example. There is a gross mismatch between the incidence of illness, which is predominantly in the Third World, and investments in health research, which are overwhelmingly focused on health problems in the industrialised countries.

However, it is difficult to mobilise funding for research that is relevant to the majority of the people. The blame is not only with the rich countries. Many Southern governments spend far too little on health, education and social programmes. Governments, especially in the South, must take a leading role in health investment. The idea that market forces alone will take care of the health needs of hundreds of millions of the poor is wishful thinking. But because the governments in the South are poor, donors in the North need to respond more vigorously.

Energy is also a case in point. Even since the first oil crisis, politicians and business leaders in the North have advocated energy conservation and a shift in favour of renewable energy. But it is disturbing that more than 90 per cent of the global funds for energy research goes to support nuclear energy and fossil fuels. Less than 7 per cent is allocated for research on renewable energy and conservation.

I have chosen energy research to illustrate the odd way in which research funds are allocated. However, we encounter the same pattern in other sectors. Even today, most agricultural research is geared at maximising crop yield. There are, of course, good reasons for improving farm productivity in a world where the population grows daily by more than 250,000 persons. But now, there is ample evidence that the present system, with its high dependence on monocultures, pesticides and fossil fuels, is not sustainable in the long term. Hence the urgent need for research on alternative farming systems.
The very organisation of science is at the core of these problems. The progress of science during the past few centuries rests largely on the capability of the researcher to limit his or her scope when formulating problems. Specialisation was of the essence. Today, many of the problems facing humankind are of a nature where a "system-view" is required rather than a view focusing on the parts.

A closer cooperation and understanding between social scientists, ecologists and other natural scientists is a must. We desperately need the active involvement of social scientists to develop sound models on how to integrate environmental concern into policy making at all levels.

Finally, let me touch upon another issue. To what extent do we make use of all the knowledge generated through research in different parts of the world? I am often asked this question. I believe we have two problems: the questions of relevance and of effective dissemination of results. In my own efforts to promote research in the South, I look upon dissemination as a very important part of any research project. With the meagre resources at our disposal -- and given all the burning needs -- this must be a priority.

Science is very much looked upon as an instrument for competition and efficient industrial production. In The Third Revolution, Paul Harrison describes our approach to many of the global problems as "Hamlet-like". We cannot accept environmental degradation to a point where damages are beyond repair. Science has a crucial role to play in changing our perspective. To live up to this role will require a re-orientation, both in regard to research priorities and the organisation of science.

--- This is an extract of a speech given by Anders Wijkman, director general of the Swedish Agency for research Cooperation in the Developing Countries, at Gothenburg.