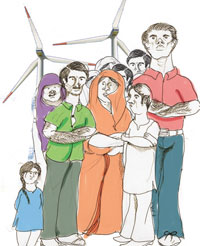 It was a trade exhibition abuzz with the restrained chatter of busy suited executives at company stalls making contacts and finalising deals. Nothing out of place except that this trade was about renewable energy technologies, which have unconventional reasons for growth. First, these technologies are seen as the most economical and feasible source of energy for millions of people unconnected to the electricity grid and having no electricity to light their houses or cook their food. This energy poverty is disabling and needs to be eradicated. Introduction of decentralised and improved technologies paves the way to catapult the poorest of the households into the most modern systems. Secondly, these technologies—from wind and solar to biomass—provide cleaner low-carbon energy options to combat climate change. These are future systems critical for survival of all.

Strangely enough the gathering knew none of these objectives. For them it was just a business, made lucrative by public investment. It was only business as usual. But this is a fundamental disconnect. The fact is that the business of renewable technologies is based on a different rationale and different and explicit social objectives. The fact also is that this business, because of these objectives, is being supported through public financing and subsidy. Therefore, the business is not about the usual, but the unusual.

This unusual business requires different models of growth, which can promote entrepreneurship, innovation and profit, but for common and environmental good. If this does not happen, the public subsidy and public goodwill for this business will be lost. The future will be squandered. We know that the fastest penetration of new energy sources is most likely to happen in regions still growing in provisioning of basic necessities. The already rich have built their energy infrastructure; they are energy reckless. They need to move to clean energy, for their massive carbon footprint is taking the world down. According to the International Energy Agency, the growth of primary energy supply in OECD countries is expected to be 0.3 per cent annually, while in India it will be the highest at 3 per cent annually between 2009 and 2035. The infrastructure is being built now; it is most appropriate not to “lock out” renewable and clean energy.

We also know that the countries ahead in building new energy infrastructure also have the largest number of poor people, who do not have access to energy. The same Paris-based energy agency’s global data book also tells us that there is huge energy poverty in the world and that this energy source is still priced higher than conventional energy systems. Here lies the nub of the problem. The poorest need access to what are currently the most expensive systems. This is possible only with massive public-financed programmes that drive down the cost.

It is not as if renewable energy is per se a new venture. Currently, 10-12 per cent of the primary energy supply comes from renewable sources (not counting hydroelectricity). But new renewables—technologies of the future —still make up only 1 to 2 per cent of this supply. The rest comes from biomass systems of the poor like the stove that burns wood or cow dung. These are the clients who can now either take the next step on the energy ladder to kerosene or LPG, or can jump to the top of the ladder by moving to modern biomass energy sources. These are the same clients who are in the dark and today have the option of selecting decentralised mini-grids for their energy needs. But if these are the people who are the targets of the new venture, then business is completely out of touch with its customers.

The future is becoming dark. The same business with the same wheeling and dealing to make a fast buck is taking over the future. A few years ago, when the Centre for Science and Environment studied the wind energy scenario in India, it found that the business had subverted the purpose for profit. Wind farms set up across the country were generating little energy. It found that the business of wind had the worst characteristics of the market: it was closed, monopolistic and unregulated. The turbine manufacturer was also the energy supplier. Capital incentives given to this crucial sector were used to create investment, not power.

The solar scam—where a single company, LANCO, a coal power major, used every dirty tactic in the corporate larder to subvert government guidelines and take over the public subsidy package—is another instance of this business going the wrong way. This is not the business of clean energy. This is the dirty business of dirty energy. The problem also is that nobody wants to talk about this “aberration”. The proponents of clean energy are social and environmental advocates. They do not want to rock the boat. As a result there is no public scrutiny of or research on this new business. The circle of knowledge and influence in this sector is limited to consultants who want the business and industry, which is in the business itself. It is in everybody’s interest to keep a tight lid on the murky side of the operations. “Don’t ask, don’t tell” is their motto.

It’s time to change. This time, for the better, not worse.