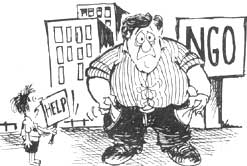 THE RECENT meeting of non-government organisations (NGOs) at Udaipur had an interesting agenda: how to evolve a way to deal with the drought in the light of the new economic policy. But they found the subject so complex that they concluded that more meetings of the kind were needed and proposed to join hands with other groups working in drought-prone areas.

All this may appear hackneyed, including the argument that if the present policies continue, India will be a desert in a decade. Rajesh Tandon, director of the Society for Participatory Research in Asia (PRIA), too admits, "There is still no viable alternative policy that we can formulate."

But this vacuum of ideas is the result of the extreme difficulties that NGOs trying to combat drought are facing. The state is retreating from its earlier commitments and the NGOs, who are expected to fill the void, are hardly prepared for the job. Avdesh Kumar, who runs the Lok Hith Samiti in Singrauli, says that everyone, even the voluntary agencies, have been turning to the state for help in the last 40 years. And now, when the state wants to pull out, there are no institutions willing or able to replace it.

The government's policies on issues like drought have not changed much either. Explains Tandon, "Relief work is still seen as welfare-oriented, short-term and ad hoc in nature. Drought relief is still not being related to environmental regeneration. The standard response to a complaint of lack of water is to add yet another hand pump."

While the magnitude of the International Monetary Fund-sponsored structural adjustment programme cannot be estimated at present, Tandon points out that the skeleton of a disaster is already in place. The cut in fertiliser subsidy has led to prices of coarse grains skyrocketing. With the revamping of the public distribution system (PDS), prices are up, while both individual and family quotas are down. The poor are clearly finding the drive towards a market economy less than comfortable. For the people of Kutch that means that they now have to buy bajra at the market rate of Rs 8 per kg.

The mismanagement of relief efforts has arrested progress in some areas. Unnati, an Ahmedabad-based NGO, points out that when the government abolished the mid-day meal scheme, "many poor parents withdrew their children from schools".

Gujarat is not the only state in trouble. In Rajasthan, almost entire villages have migrated. The Udaipur-based Akal Mukti Andolan claims that in the Kherwada tehsil of Udaipur, of the 30,000 original residents, only 6,000 are left.

The trouble appears to be one of mismanagement. The state government has yet to pick up its full quota of grain. This means that people now pay anywhere between Rs 4.50 to Rs 6 per kg.

However, NGOs are still finding it difficult to mobilise people. Admits Kumar, "We are able to mobilise people to pressurise the state on political issues like the Mandal Commission and even on issues of displacement, but there is little action on relief. Philosophises Tandon, "Perceptions need to change. There is no effort to examine the drought issue holistically. That must change." He is right, but who will bell the cat?