No cheap change is possible 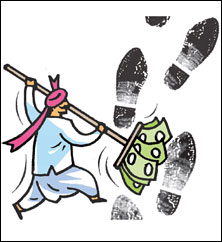 Last fortnight I asked: is India rich enough to pay for the cost of transition to a low-carbon economy? I put the question in the context of current moves in climate change negotiations which demand countries such as India—till now seen as victims of the carbon excesses of the already industrialized world—must now take full responsibility to reduce greenhouse gas emissions.

The US-sponsored and India-supported Copenhagen Accord rejects the principle of historical responsibility towards climate change, radically changing the global framework of action for ever more. No longer does the industrialized world need to first reduce emissions and make space for countries such as India to grow. No longer need the rich world pay for our efforts to avoid growth in emissions.

So, can India reduce emissions at its own cost? A powerful section among Indian decision-makers believes this is easy. They say, and have stated in Parliament, India does not need money to pay for mitigation; India has the technologies; in any case, its energy-inefficient industries can be made to buck up to save emissions and money. But facts tell a different story. Reality really bites in the real-world climate change game.

My colleague Chandra Bhushan has just released a report, Challenge of the New Balance, which tackles precisely this question. It takes up six of the most energy- and emissions-intensive sectors of Indian industry, breaks down their energy-use and emissions profiles and looks at the technology pathway for the future.

These high-growth sectors—power, steel, aluminium, cement, paper and fertilizers—add up to 60 per cent of India’s carbon dioxide emissions, currently. The study finds answers which should force careful re-thinking, not just in India but globally, on how emissions will be cut in real time in the real world.

Contrary to general perception, the study finds many of these sectors—the companies that comprise them— operate at global best levels so far as energy efficiency and greenhouse gas emissions are concerned. India’s cement industry, for instance, already has the lowest emissions in the world because of its use of flyash and slag. Even the much-abused coal-based power generation sector fares well in its emissions record.

Indeed, industry has invested in the best technologies because in India energy costs are high. Of course, more can be done to improve performance. But India is not the place the world can look to for easy and cheap emissions reductions in the future.

In fact, based on current policies and technologies, Indian industry is well on track to meet the country’s current ‘commitment’—20-25 per cent reduction in the emissions intensity of gdp by 2020. It’s chicken feed. It is about picking off low-hanging, low-cost options.

The tough part is what begins now for the future. The fact is in all high-polluting sectors, technology options to reduce emissions stagnate after 2020. There is no real way India can reduce emissions without impacting growth as we know it, once it crosses the current emission-efficiency technology threshold. This is the real climate challenge.

The only real option in reducing emissions is to change the fuel mix of the energy, which drives the economy. But even this is theoretical. Options are limited and have a prohibitive cost. To reduce coal use, let’s say, India invests big-time in solar, biomass or off-shore wind.

Yet all done and all money spent, it will still not be able to substantially reduce dependence on coal, even after one factors in, as the study does, the use of clean coal technology or the switch to gas. And remember, India has to provide affordable power to massive numbers of people. The bottom line: the going is tough.

But this only means India is no different from the rest of the world. In fact, it is at the bottom of the development trajectory—it has a long way to go to meet its growth needs, a way that can only add pollution. This is inevitable. India will need the ecological space to increase its emissions. But the problem is the world has decided it will not share growth: the rich nations will not reduce and make space for late entrants such as India to first emit and then clean up.

The hard truth is options for serious emissions reduction are limited in the industrial model we belong to or want to inherit. The world has to look for new ways to cut emissions and pay big-time for these. There are win-win options but only if we consider that, in all current options, the planet is losing.

This new growth model will need changes in behaviour and lifestyle. It will need new drivers to stimulate quick and aggressive technology innovation. Changes to take the world much beyond the known and the ordinary. This change will not come cheap.

This is the most inconvenient of all truths. And this is precisely why the already-rich world wants to spin a deal, built not on their commitment to reduce emissions but on the bribe that countries such as India can also continue to emit. This is not good for climate change. It is devastating for us. The study shows why.