No climate for cleantech 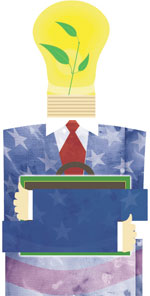 What is the outlook for developing countries in getting clean energy technologies transferred to them at a reasonable fee? Will intellectual property rights (IPR) over green technology to mitigate the impact of climate change prove to be a tough barrier? Can poor nations hope to compete with the developed world in bringing such technology to the market? A clear idea of the challenges that lie ahead was available in a speech made by a top American official at a recent conference on clean energy policy in the US, points that have a major bearing on the green future of the developing world. Reproduced below are some of the key points enunciated by Acting Secretary of Commerce Rebecca Blank.

At (the Department of) Commerce, we continue to aggressively support entrepreneurs all across America who are developing clean energy and energy-efficiency technologies.

First, the largest potential markets for clean energy technologies lie outside the US. Global investment in clean energy totalled over $240 billion in 2010.

We want innovative US companies to be at the forefront of delivering green products and services. We are also working with them to identify the industry’s most pressing trade challenges and coordinating efforts to address them.

To that end, we have launched the Renewable Energy and Energy Efficiency Export Initiative, with an online exporters guide and website, export.gov/REEE, to help green energy companies find new global markets.

As part of this initiative, we are co-chairing with the Department of Energy, a multiagency effort aimed at addressing the major export barriers facing US renewable energy and energy efficiency businesses.

Because financing can be a significant obstacle, the Export-Import Bank, the Overseas Private Investment Corporation and the US Trade and Development Agency have teamed up to produce new financing products specific to this sector.

The export programme fits squarely into Commerce’s leadership role in implementing President Obama’s National Export Initiative. NEI, announced in 2010, aims to double US exports by 2015 in support of millions of American jobs.

Second, the US gets about one-fifth of its electricity from nuclear energy. At Commerce, we are supporting the nuclear industry’s endeavours to rebuild its manufacturing base.

Fourth, through our Green Technology Pilot Programme, the US Patent and Trademark Office has accelerated hundreds of patent applications for green inventions. Earlier patenting of these technologies can help inventors secure funding, create new businesses and the jobs that come with them, and bring vital green technologies to market much sooner.

What comes through loud and clear is that green technology will be a huge business for the US with state funding, innovation and trade policies, employment generation and export initiatives all coming together in a potent mix to give it a dominant spot. Besides, the speed at which patents are being granted will ensure that technology will be tied up in a thicket of IPRs and that transfer of this technology will come at a huge price. Let us not forget that the US is one of six countries which control over 80 per cent of all clean energy innovations in the world, the others being Japan, Germany, Korea, France and the UK. This is what a study conducted by the UN Environment Programme (UNEP), the International Centre for Trade and Sustainable Development (ICTSD) and the European Patent Office (EPO) revealed last year.

More worryingly, a simultaneous licensing survey conducted as part of the project found that licences were only rarely going to developing countries. The little that did was primarily going to Brazil, China and India. The survey examined some 400,000 green energy patents in sectors identified by the International Panel on Climate Change—energy, buildings, transportation and industry/agriculture.

The lopsided nature of this technology balance is unlikely to change because analysts have noted that the Cancun Climate Change Conference in December 2010 largely ignored IPR issues related to clean technology. So even if developing countries complain that IPR is a major obstacle to technology transfer and endangers climate change mitigation and adaptation in the countries that need it the most, the exclusive club of the rich nations that possessed the patents will riposte with stock answer: IPRs are essential to promote research and development, which spurs innovation and, in turn, attracts investment.

It’s high time the developing world pooled their talent and resources to find suitable solutions for their predicament even if it’s merely to tackle such problems as finding improved cooking stoves that increase the efficiency and reduce emissions from burning biomass. But more than anything else we need a global debate on the public good character of environmental protection and the limited role of IPRs in mitigating environmental externalities caused by climate change.