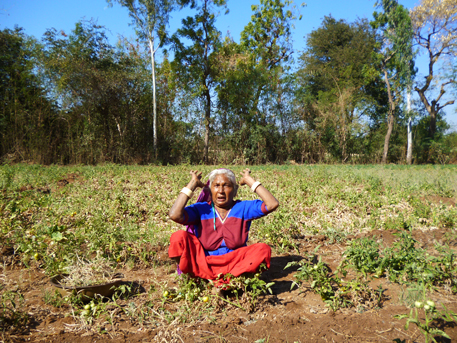 I don't know her name. She was busy plucking weeds from her tomato farm when I found her. She was wearing bright blue and red clothes, her shining white hair half covered with a purple shawl. “She makes for a good photograph,” I thought to myself. I started moving towards her and took out my camera. She looked at me curiously, smiled and then got back to plucking weeds. I took that as her consent. I clicked her pictures till I was satisfied that I had got the right frame.

I asked my interpreter Sukhdev Singh, a 21-year-old engineer from her village Mithi Virdi in Gujarat's Bhavnagar district, to introduce me to the woman. He told her I am a journalist from Delhi and that I am writing about the proposed nuclear power plant in her village. Her expression suddenly changed. She got angry and started shouting, “hamara photu na paro (do not click my photograph).”

She threw her hands in the air in anger. I could not fathom the reason for her anger. It dawned on me that she was gesticulating more out of fear. Singh interpreted her words: “She thinks that you are from the company which is building the nuclear power plant and that you would misuse her photo.” She thought that I will present her as somebody who wants the plant. 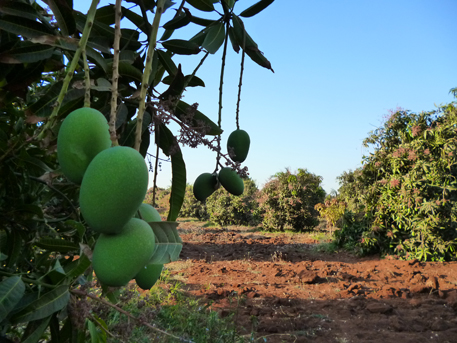 She said that this was the patch of land she has to feed her family. Through my interpreter, I reassured her I was a journalist and was visiting the village to understand what people of Mithi Virdi think of the power plant. She did not believe me. By this time her son and daughter-in-law emerged from their hut. I tried to convince her but she was fearful.

I sat with her and asked if she could tell me her name. She refused. I turned to the family members and they too were reluctant to share details. The woman politely said to me, “My son, you sit, drink water, eat food and relax, but please do not misrepresent me.” I assured her that I would not misuse her photo and I was not there to take away her land. Her expression was that of disbelief. I asked her to forgive me and left her house cursing myself for having ruined her day.

The proposed Mithi Virdi Nuclear Power Park which will have six reactors of 6,000 MW each will take up 777 hectares (ha). Of this, 608 ha is agricultural land. The power plant was recently in news. Around 5,000 farmers walked out of the public hearing organised by the state government on March 5. They alleged the public hearing is illegal and shouted slogans against the plant.

Farmers are against the plant because it will be built on or close to their fertile land. A walk through the villages confirms their claim. Mithi Virdi and the adjoining village Jasapara are full of mango and cheeku orchards. Farmers take three crops a year and earn well. Take the case of Ramdev Singh Thiruwa, who has around 500 mango trees and 100 cheeku trees on his 50 bighas (8.7 bighas make a hectare) farm in Jasapara village. 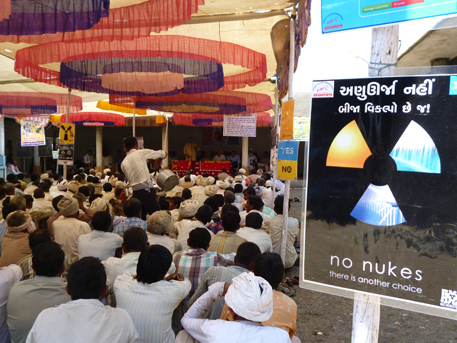 He grows coconuts, vegetables and fodder on the same land. “I easily make Rs 10 lakh annually,” said Thiruwa. “I don’t need the company’s or the government’s money to live a happy life. I can send my children to any good school I want in the city,” he adds. Thiruwa’s land is just 500 metres from the sea. “Despite being close to the sea, the water in my wells is sweet,” said Thiruwa.

While the fear of losing their fertile land is the primary reason farmers anywhere would oppose a plant, the fact that it is a nuclear power plant increases the opposition. In Bhavnagar, even the farmers whose villages do not figure in the list of the 24 project-affected villages are against the plant. Shambhu Bhai is a farmer whose village is 11 km from Mithi Virdi. He does not want a plant.

“Your land is not being taken away, then why are you against the plant?” I asked.

His wife Hansa Ben who had just returned from the field was quick to reply: “There is fear of radiation leak. It affects human health, women deliver handicapped children and the land’s fertility goes down,” said Hansa Ben who is illiterate.

Curious, I asked her, “how do you know all this?”

She replied: “I heard it in the meeting.”

“Which meeting?” I asked.

“These meetings are organised by sarpanchs and social workers in the villages. They call us to educate us about the harmful effects of nuclear power plant,” she said.

This prompted my next question. “Have you attended any meeting organised by the company that is building the plant?”

“No. I don’t know if they have organised any,” she said. But government says that the nuclear power plants are safer now, I said to her.

“Who knows,” she said cynically.

Talking to farmers, I learnt that the NGOs have been regularly organising meetings in the villages since the past five years. I was keen to attend one such meeting. And I got lucky. The same day, a big meeting was organised by many anti-nuclear NGOs in Jasapara village. It was a day before the public hearing.

Fukushima, Chernobyl in their mind

A big and colourful tent was erected in the community centre in the village. Almost all the bamboo poles holding up the tent had anti-nuclear posters hung on them. Posters of handicapped children were pasted outside the centre. Around 2,000 people had gathered. The meeting was organised by various NGOs working in Bhavnagar and outside. While some speakers were stressing on the point that no matter what, people should not give away this extremely fertile land, others were highlighting why a nuclear power plant is bad. Slogans like “jaan denge, zameen nahin (we will give our lives, but not land),” were heard every 15 minutes. 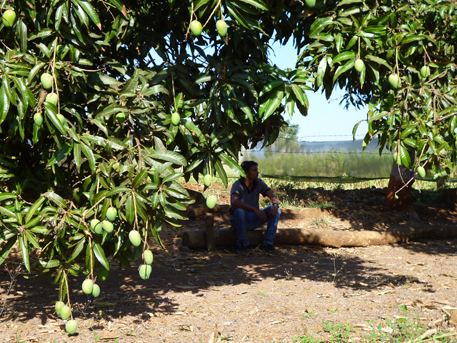 Paryavaran Suraksha Samiti (PSS) was one of the non-profits which had called this meeting. PSS is based in Vadodara district of Gujarat. “Farmers will lose their fertile land is the primary concern, safety aspects of nuclear power are also questionable,” said Rohit Prajapati of PSS. As a voluntary organisation our job is to inform people, he added. The anti-nuclear NGOs working in the area say that they are against nuclear power because till now the world does not have a foolproof technology to handle the hazardous nuclear waste and that the radiations from a leak will have long term and irreversible consequences. When there are alternatives available why opt for something that is potentially dangerous, they say. “We are just informing people. They are free to make their own choices,” said Prajapati.

But have the farmers listened to the other side before making up their mind? Nuclear Power Corporation of India Ltd (NPCIL) organised a trip of sarpanchs to the operational nuclear power plants a year ago. “We have done our best to inform farmers that nuclear power is safe,” said P M Shah, chief engineer, NPCIL. But people in villages are distrustful of the government. “I have spoken the communities living close to the operational nuclear power plants. They are all living in fear,” said Shaktisinh Gohil, sarpanch of Jasapara over a sumptuous dinner that he had organised for me—butter smeared bajre ki roti (millet flour bread), a dish of onion and potato, lentils, jaggery, elaborate salad, mango pickle, papad and butter milk.

Thanking him, I was heading to the home of one of the farmers where I was staying. It was 11 pm. I found my interpreter, Sukhdev Singh, among a bunch of young guys sitting in a house making pamphlets against the nuclear power plant. These pamphlets were to be displayed in the public hearing scheduled the next day.

“It is late in the night. Don’t you have office tomorrow?” I asked Singh.

“I have taken leave because I want to participate in boycotting the plant,” he replied.

“Why are you against the plant? What do you know about nuclear power?” I asked.

“Don’t you know what happened in Fukushima recently and Chernobyl before that? Any day the risks of having nuclear power will outweigh the benefits,” he said.

His family has 15 bighas. It has around 300 mango trees and vegetables are also grown. “They will take away our land and then employ us on our own land,” said Singh. “Today we are employing people on our farms, if the plant comes we will become dependent,” he added.

“Today, after working hard in office in the city, I return to my beautiful home in the village. My parents have grown this mango orchard with a lot of labour. Whenever I feel sad, I go and sit under a mango tree. The cool breeze from the sea relaxes me. I feel happy when I see children playing in my orchard. Please don’t take all this away from us,” he continued.