One item on the agenda of the much-discussed Narendra Modi-Barack Obama meeting that has Indian commentators flummoxed is hydrofluorocarbons (HFCs). The joint statement issued after the meeting of the two heads of states says rather ambiguously that the two sides agreed to cooperate on “next steps to tackle the challenge posed by HFCs to global warming.”

HFC has been a bugbear in the India-US relationship. The US wants to begin negotiations for the phase-out of HFC—a chemical used in a wide range of industrial and household products like refrigerators, air-conditioners and solvents—under the UN’s Montreal Protocol. India argues that the Montreal Protocol is for protecting the world from ozone layer depletion and HFC is harmful because it contributes to climate change, so discussions should take place under the UN’s climate convention (UNFCCC). 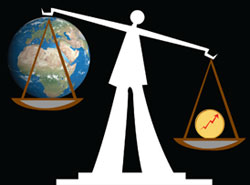 In fact, HFC is the chemical that the world introduced to phase out hydrochlorofluorocarbon (HCFC), an interim substitute for chlorofluorocarbon (CFC). Both HCFC and CFC were indicted for damaging the stratospheric ozone layer that blocks harmful ultraviolet rays.

Seemingly, the US is driven by green concerns, as HFCs are greenhouse gases 2,000 times more potent than carbon dioxide. But the outcome depends on the alternative the world chooses. When this chemical was introduced it was understood that it would be bad for the climate. The world decided to solve one problem by creating another.

In the past decade, the use of HFC has grown by 8-10 per cent annually, mostly in the US, Europe, Japan and Australia. Now developing countries will begin to phase out HCFC. Should they first phase into HFC and then phase out of it because it is bad for climate? Or should they leapfrog to new substances, good for both ozone and climate?

This is where the politics of technology becomes murky. The same companies that first invented CFC and then profited from its phase-out are now ready with another alternative. It is not a coincidence that US companies DuPont and Honeywell are promoting hydrofluoro-olefins (HFOs) for air-conditioning and HFC-1234yf for car air-conditioning. But these new generation chemicals are plagued with same problems. HFO is good for ozone, has less global warming potential but still not so good for climate because it is energy-inefficient. Since indirect emissions (due to energy use) from appliances are responsible for over 80 per cent of the problem, this chemical will add to climate change.

But the commercial interests are huge and powerful, hence the push to move discussions to the Montreal Protocol, where the US is a party and things can be expedited. The Indian government’s position is equally driven by commerce. Its four companies that made ozone-depleting CFC got a windfall of US $82 million to move to HCFC. Now they want to be paid for the next phase-out to HFC. Worse, they were paid millions of dollars to reduce the greenhouse gas emissions from HCFC plants under the climate convention. It is, therefore, in their interest to keep the negotiations under the Montreal Protocol to phase into an ozone-friendly gas, which is bad for climate.

The Modi-Obama joint statement indicates a movement ahead by recognising the need to use the Montreal Protocol to reduce HFC and to continue to account under the UNFCCC. This is good. Now the real work begins. It is important for India to take a proactive position. It should first get industrialised countries to agree to an ambitious phase-out of HFC by 2020, instead of 2035. Next, it should ask for changes in the Montreal Protocol so that countries can leapfrog the fluorinated chemicals treadmill. Alternative technologies, rated on the basis of their life-cycle energy emissions, are available. For instance, some companies are moving to hydrocarbons, such as propane and butane, for refrigeration and air-conditioning. The US still does not allow this shift, arguing inflammability problems associated with these off-patented technologies. This is what needs to be changed.

The question is: profit or planet?

International standards in refrigeration and air-conditioning: an introduction to their role in the context of the HCFC phase-out in developing countries

Growth of climate change commitments from HFC banks and emissions

HFCs: a critical link in protecting climate and the ozone layer