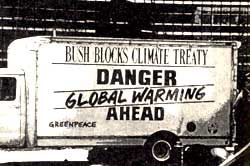 THAT America rules the waves became abundantly clear to me when I witnessed USA flex its muscles over the entire world at the last session of the Climate Change Convention. The UN was reduced to functioning as an extension of the US state department. And George Bush made a "neutered" climate convention - the centrepiece of the UNCED circus - conditional to his attendance at the Earth Summit.

Excitement gripped the air as I walked to the UN complex on First Avenue in New York, to attend the final session in early May. Armed police of almost an entire precinct had been mobilised to deal with a small group of unarmed Greenpeace protesters. A Greenpeace truck, with "Bush blocks climate treaty... globalising ahead" painted across it, blocked the delegat an rance to the UN, preventing Robert Reinstein, leader of the US delegation, from entering the building.

A few protesters, in inimitable Greenpeace style, had chained themselves to the truck, whilst others locked themselves to flagpoles nearby. Two climbers rappolled 20 storeys down the top of the UN Plaza building opposite, They managed to partly unfurl a banner which read "Bush, heat up the economy, not the planet: cut C02 now", before the police dragged them in through the windows.

This use of power was indicative of what was to follow. Despondency and despair grew as USA cajoled and bullied the world community to concede to its demands. Political expediency won over the environment. Geopolitics and petty self-interest ruled the day. The opportunity to build a better tomorrow was lost to save George Bush's reputation today. Conservatives in the US administration claim that Bush will be held to ransom* by the Third World "Thugocracy" Vice-president Dan Quayle's staff cautions that eco-inspired regulations will cripple the ailing American economy and cost millions of jobs.

Governments in western Europe, relatively more enlightened on environment, were reduced to worrying about embarrassment being caused to the most powerful man on the planet today. Deals and counter-deals were struck and phone lines buzzed across the globe. Nigel Howard, the new British secretary for state for environment, and Germany's Helmut Kohl did their best to ensure that Bush would go to Rio, by agreeing to a week convention, This, to enable Bush to face his conservative electorate later this year with minimum possible taxes on or cuts in, petroleum consumption, which sustains the American lifestyle. And to enable him to fulfil his last election promise of being the "environment president".

First, USA's allies in the European Community fell in line, contrary to the firm stand they had taken earlier. Saudi Arabians and Kuwaitis, who had an obvious interest in emasculating the climate convention in order to ensure minimum carbon cuts to maintain their oil-based leverage in the world economy, did their best to delay and disrupt the negotiations.

The members of the Commonwealth of Independent States, once the states of the mighty USSR, didn't raise their voice, except to support USA. Money power divided the impoverished Group of 77 (G-77), most of whom soon muted their opposition to the Anglo-American text that was put forward ostensibly as the chairperson's text. India and China offered some resistance to US hegemony, but in the end high morals gave A blockade that failed: Greenpeace protests in front of the UN way to realpolitik.

India rallied hard and carried the G-77 burden for a large part against the US tide. When confronted with weak commitments by industrialised countries and unable to do much about it, they pushed for a dilution of general commitments by all countries. Some support from the G-77 was forthcoming for this negative approach. But when C Dasgupta, leader of the Indian delegation, raised the crucial issue of apportioning global sinks in a way that each human being as equal rights to them, which the industrialised world had conveniently by passed, he received little support even from the developing countries.

Chairperson Jean Ripert's text talked of calculations of greenhouse gases' removal by sinks on the basis of available scientific research. But Dasgupta pointed out that this was more a political than a scientific issue as the major greenhouse sink - the ocean - is a global common and must be app'ortioned between countries accordingly, Thus substantially affecting national net emissions. Most countries of the G-77, however, did not appear to understand the issues involved or were not interested even though the issue was brought up at a number of sessions. India was, thus, isolated on this issue.

Though the primary responsibility of tlt industrialised world for the present environmentlist mess was recognised by Northern NGOs at the sessioikthey too were unwilling to demand that their governments support the idea of equal rights to global resources for all human beings.

One US environmentalist said that the rights to the atmosphere issue, though an appealing idea based on high ideals, would not pass the. "laugh test" in the USA. It was not on the agenda at this time, he said, but could perhaps be in a fairer world.