People are not the planet's pollutants

The consumerist tendency of our society has resulted in the branding of population explosion as the villain in a world that has place for everyone's need but no one's greed. 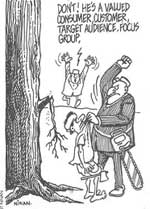 THE WHOLE world, including the most sober environmentalists, seems obsessed with the dangers of a rising population. An obsession that has led people to be unjustly branded pollutants in our collective environmental consciousness. And the causes for this are essentially threefold.

In part, this phenomenon stems from a misconception of life itself. While the mythologies of even the most primitive societies recognise the naturalness and necessity of the processes of birth and death, modern society has lost sight of their significance. Indeed, many of our present sociological and environmental problems are the consequence of not only our failure to control birth, but also of our attempt to control death. We pamper life beyond its basic requirements and extend it beyond its useful bounds.

The phenomenon can also be seen to have derived from the current perverted appraisal of the human being. In an anthropocentric society, people constitute the primary resource and impetus to growth and development. As such, the occasion of birth has traditionally been greeted with joy and celebration. Nowadays, however, the acquisition of a few more pigs, an extra acre of land, or an additional automobile is regarded as progress. How and when did a new pair of hands in the family or society lose its importance? The answer is not hard to find. By early next century, the urban population of most developing countries will account for half the national total. Migration to towns and cities typically results in the metamorphosis of primary producers into active consumers. Mass media advertising (or pernicious adult education, as Aldous Huxley called it) and modern technology accelerate this metamorphosis. In our consumer society, the value of a human being increases in proportion to his distance from primary production.

Lastly, there is the way in which natural resources are being exploited and apportioned. More than 60 per cent of the planet's resources are enjoyed by a privileged 20 per cent of its inhabitants. More than half are used directly or indirectly by nations to protect themselves from each other. Similarly, the menace of greenhouse gases, global warming and the destruction of the ozone layer are products of activities extraneous to the sustenance of life. Ample land remains, which, when properly conditioned, can provide food, fodder, fibre and fuel; three quarters of the earth's surface -- the ocean -- has yet to be tapped adequately; we harness a mere fraction of the solar and geothermal energy that surrounds us. The planet's known and potential resources are sufficient to support with ease 4.5 billion or more people for centuries, provided that equability is maintained.

In short, the universal obsession with population explosion is largely the bogey of affluent societies who are loath to reduce their consumption and share supplies. This bogey has led to the mistaken belief that people are pollutants. The truth is that the planet has enough to satisfy everyone's need but not enough for even a few's greed. The thrust of population control, if shifted towards a symbiotic lifestyle, will have a more enduring impact. Let environmental awakening be the primer of population stabilisation and environmental education the right contraceptive.