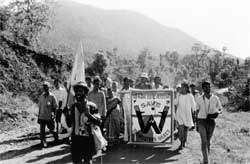 the last two decades have witnessed a conspicuous increase in environmental awareness and movements all over the world. While in the developed countries the focus has been on issues such as global warming, in the developing countries, forest and land degradation, land and water pollution, the adverse impacts of development projects on the environment, have acquired importance. The pressure on increasing social tensions and conflicts over the use of natural resources have aggravated. This has provoked movements to compel governments to pursue "environmentally-sound" development strategies.

As in the rest of India, Karnataka has witnessed a number of movements relating to green issues.

The genesis of forest agitations in the country can be traced back to the British colonial era when the process of commercialisation of India's forests accelerated.That was the time when the colonial government asserted the state's monopoly rights over forests resources to the detriment of peasants and local village communities that enjoyed traditional rights and access to these forests. Social conflicts and movements have been well documented in a number of studies. These agitations have continued in the post-Independence period. In fact, Independence has made little difference to the long standing antagonism between the state or more precisely the forest department, and the peasants and local communities.

One such movement in Karnataka which attracted wide attention is the Kunsur satyagraha. The state government decided to lease over 28,350 hectares of degraded and reserved forests lands in the Kunsur cluster of villages for forty years to the Karnataka Pulpwood Ltd (kpl) - a joint sector company formed on November 14, 1984 by the government of Karnataka and the Birla-owned Harihar Polyfibres - for raising captive eucalyptus plantations. The venture overlooked the claims of the local villagers who depended on these lands to meet their basic needs. The move evoked widespread protest from the local villagers and several non-governmental organisations (ngos). The Samaj Parivartana Samudaya, a Dharward- based ngo , with the support of other organisations and eminent personalities such as Shivaram Karanth, Justice D M Chandrashekhar and Kadilal Manjappa led the "Save the Common Lands Movement" to reclaim their lands and rights. Initially, the campaigners sent petitions to local government officials and met the then chief minister, Ramakrishna Hegde with a plea to cancel the kpl agreement. But when these efforts did not yield the desired results, the affected people held a series of protest meetings and demonstrations in several places on November 14, 1986, which coincided with the anniversary of the setting up of the kpl .

In December 1986, a public interest litigation case was filed in the Supreme Court by Shivaram Karanth, Anil Agarwal and others. The Supreme Court issued a stay order on March 24, 1987 to maintain the status quo with regard to the possession of land. However, the kpl continued its operations. Meanwhile, the people of Kunsur and the surrounding villages launched a satyagraha on November 14 1987, which is now popularly known as the Kunsur satyagraha.

Due to a sustained struggle for over seven years, 72 legislators from various political parties brought effective pressure on the government to close the kpl. On October 3, 1991 the government wound up the kpl .


The Western Ghats, spread from Kerala to Maharashtra, has witnessed several environmental movements and struggles. The region has been notified by the United Nations as an environmentally-sensitive area. The Nilgiris Biosphere has been the focus of extensive development activities such as the setting up of industries and hydroelectric projects. However, since this region falls within the ecologically fragile belt, the conflict between the twin goals of development and conservation has resulted in several environmental agitations. The Save the Western Ghats March (swgm) began on November 1, 1987 along the Western Ghats for 100 days from the southern tip of Kanyakumari and the northern tip at Navapur, Dhulia district in Maharashtra.

In 1983, when the forest department started felling trees in Sirsi taluk and other places in Uttara Kanara district, a number of protests and agitations enveloped the region. Under the leadership of Panduranga Hegde, a people's movement known as "Apiko" movement was launched to protest against the forest department's policy of felling trees for commercial purposes. The movement was a local version of the "Chipko movement" in the Himalayas led by Sunderlal Bahuguna, the eminent environmentalist. The "Apiko' movement in Karnataka, like the Chipko movement helped create better awareness of the adverse environmental costs of development strategies and commercialisation and industrial utilisation of forest resources.

This region is in ferment once again. This time the issue concerns the setting up of the Nagarhole sanctuary. Although the sanctuary will protect habitats and biodiversity in the region, it has immense social costs. Covering an area of 64,339 sq km, the sanctuary, will result in the eviction of about 3,000 tribal families from 57 hamlets to new settlements. Tribals who have had a symbiotic relationship with forests from time immemorial are concerned that the decision to set up the park will uproot them from their traditional lands. They feel that these forests have sustained their livelihoods and the setting up of the sanctuary will not give them a stake in conservation or provide them with alternate and sustainable livelihoods. The forest department banned their entry into these forests and have stopped the harvest non-timber forest products.

Concerned about this, the tribals of the affected areas of south Karnataka launched an agitation "Enter the Forest Movement" in November 1995 from Billanahosahalli, a tribal village near the Nagarhole National Park. Tribals from Hunsur, Beggadadevanakote and Piriyapattana participated in this agitation. They entered the forests, broke forest laws, and collected forest produce. The samaj parivartana samudaya organised several yatras in the adivasi areas of Nagarhole. About 5,000 adivasis took part in a rally in Bangalore to draw the attention of the government towards their woes.

The decision of the government to permit the setting up of a holiday resort by the Taj Group of Hotels at Moorkal, which is within the limits of the Nagarhole National Park, has given further impetus to the tribals' movement against the sanctuary. This decision seems to cast doubts on the government's commitment to environmental protection, ecological balance and wildlife conservation.

Tribals from Karnataka, Kerala and Tamil Nadu, under the leadership of B D Sharma, president of the Bharatiya Jan Andolan (bja) and also chairperson of the National Front for Adivasi Self-Rule (nffasr) and ngos such as Development Through Education (deed) and Coorg Organisation for Rural Development ( cord), took part in a rally at Moorkal to protest against the proposed holiday resort and to assert their traditional rights over forests. The tribals planted bamboo saplings, which is identified as an important part of their socio-economic and cultural life, in the forest lands leased out to the Taj Group. Members of several ngos have been holding programmes in the affected regions to educate the tribal people of their rights. It is reported that due to the protests by the adivasis, the hotel management has stopped construction work and have sought police protection. These protests have once again highlighted the conflicts between the local and larger economies with regard to access to and use of forest resources, and the adverse social costs of forest policies. They also highlight the need for a rethinking of current conservation strategies so that the local communities are involved as a partner and given a stake in conservation.

The green movements in Karnataka have focused on a wide spectrum of issues, such as forest and land degradation, pollution of land and water, the adverse environmental costs of industrialisation. They have been broadbased in which locals, indigenous communities and women have participated. The inspiration and leadership for these movements has not only come from enlightened citizens and environmentalists but also drawn from the grassroots and local communities.

Also, the role of the environmentalists has not only been confined to holding agitations, but also improving the environment, environmental awareness, and people's participation in the use and management of natural resources through various activities and programmes. While the role of the environmentalists in acting as pressure groups on the state is acknowledged, a major criticism against them is that they tend to blindly oppose all development projects without suggesting viable and operational alternatives. The developing countries cannot halt growth in the name of environment. Rather growth needs to be accelerated if the goal of higher standards of living is to be realised. However, if growth is to be sustainable, development strategies need to be reoriented so as to incorporate environmental concerns.