Physical Review, which began in 1893 as a monthly journal of indifferent repute, has evolved into a standard for the international physics community. 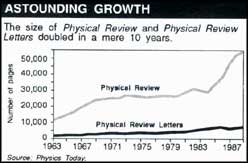 THIS IS the centenary year of Physical Review, one of the leading journals on physics. The journal has grown from its humble beginnings in New York in 1893, to become an institution in its own right. And though in the first few decades of its existence it was primarily a forum for the work of American physicists, it subsequently acquired an international character.

The journal today is representative of the physics community with many of the trends in research being reflected in its pages. As C L Mehta of IIT Delhi puts it, "Physical Review is in many ways the definitive physics journal."
Published by the American Physical Society, the Physical Review is an example of the numerous scholarly journals that appeared in the 19th century as a consequence of the growth of scientific inquiry. Other prominent journals that started around the same time include Nature, which started in 1869 and Scientific American, first published in 1845.

Physical Review did not always set standards of excellence in scientific publishing. Award-winning science writer James Gleick, who also wrote the biography of Nobel laureate Richard Feynman, recalls the time when Feynman and his classmate T A Welton, while they were college sophomores in the 1930s, tried to acquaint themselves with the latest research by leafing through issues of the journal. He says, "Only after several months did they begin to realise that the journals made poor guides. Much of the work was outdated by the time the article appeared. Much of it was mere translation of routine results into alternative jargon. News did sometimes break in Physical Review, if belatedly, but the sophomores were ill-equipped to pick it out of the mostly inconsequential background."

M G K Menon, president of the International Council of Scientific Unions, agrees that the emergence of Physical Review as a leading journal is a recent phenomenon. "Most of the important developments in nuclear physics, quantum mechanics and relativity," he points out, "were reported in European journals." Before 1940, Europe had been the centre of global scientific activity and it was mainly to compete with European journals that Physical Review was changed from a monthly to a fortnightly publication 40 years after it first came out.
The turning point in the fortunes of the journal, however, came after World War II, when physics research in the US was strengthened by the immigration of many eminent physicists from Europe, who brought with them their immense expertise and trained a whole generation of American physicists. The growing importance of Physical Review reflected this upsurge of physics research in the US after the 1940s. There was a marked increase in the quality and quantity of research published, which included Albert Einstein's 1935 paper written jointly with Boris Podolsky and Nathan Rosen, and regarded as a major contribution to the debate on quantum mechanics.

In response to the changing needs of its readers, Physical Review has undergone many changes in form and content. In 1958, the weekly Physical Review Letters was started as an offshoot of Physical Review so that important results could be communicated rapidly. In 1970, Physical Review, hitherto a single entity covering all aspects of physics, was split into four different journals, each concentrating on a specific field. These four journals known as Physical Review A, B, C and D, pertain to general physics, condensed matter physics, nuclear physics and particle physics, respectively. The beginning of 1993 saw the introduction of Physical Review E, which devotes itself to statistical physics and contains an entire section on computational physics.