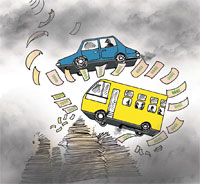 A harried parent called a few weeks ago. She wanted to know if the pollution levels in Delhi were bad and if so how bad. The answer was simple and obvious. But why do you need to know? Her daughter’s prestigious school (which I will leave unnamed) had sent a circular to parents, saying they are planning to shift to air-conditioned buses because they were worried about air pollution. She wanted to know if this was the right decision.

My answer changed. The fact is that pollution levels are high and we do need to find ways to bring them under control. But the solution is not to think that the rich can find ways to avoid breathing the air, and so keep pollution at bay. I asked her if the school was also planning to build an air-conditioned funnel for walkways and an air-conditioned gymnasium so that children would not be exposed to this foul air.

What an irony that instead of fighting pollution and demanding change, the city’s rich and famous —many drive big cars and run them on subsidised diesel—think they can escape this noxious air. They can opt out of the whole “dirty” system and even generate their own air to breathe.

But escape is not so easy. Air pollution and, in fact, environmental degradation are great levellers. Consider this: there is more than enough evidence that in-vehicle pollution is often a greater risk than the air outside, however foul. Worse, air-conditioned vehicles are more polluted than those with no air-conditioning. A recent study from China (where pollution levels are certainly bad) shows that the air inside air-conditioned buses was dangerously high on air toxins like benzene, toluene and xylene. The level of toxins in these buses was higher than in open buses. This is easy to understand.

The pollution inside a vehicle is caused by air intake—what the vehicle takes through vents from outside—as well as “self-pollution”—vehicle exhaust in the passenger cabin because of leakage. In air-conditioned and sealed vehicles, this trapped air circulates and gets even more concentrated in terms of exposure than just ordinary but dirty air. The air-conditioning system is not designed to filter bad air. In California, where also there is a serious ambient air quality problem, a study found that children in school buses with closed windows were exposed to much higher and unacceptable levels of air pollutants. In this case, the exhaust concentrations inside the vehicle were 2.5 times higher when the windows were closed as compared to when they were open. So, if you think you are “safe” inside your car, my advice is roll down the window and don’t smell the air but scream instead that pollution levels are hurting you and your child’s health.

We also think that we can run away from pollution by moving to greener areas with less traffic in our cities and that we can find our island of clean air. But think again.

In heavy traffic areas, particularly along main roads, air pollution is high. In most cities, growing use of diesel is leading to hazardous levels of nitrogen oxide. This toxin is particularly high in heavy traffic zones and main roads. We know this. What we do not know is that there is another present and invisible danger aground—ozone, which directly affects our lungs. But it is not to be found where you would expect it. High levels of nitrogen oxides and volatile hydrocarbons interact with sunlight to form ozone. But as nitrogen oxide then reacts with ozone and mops it up, this gas drifts to areas where there is little pollution. This way, ozone levels are high in the green areas of the city. This pollutant, formed from the toxic exhaust of vehicles, looks for safe havens where the air is clean. It is no wonder then that the limited studies conducted in Delhi—where there are ample sunny and hot days—found ozone levels highest in the green areas of Civil Lines in the north and Siri Fort in the south.

The powerful rich of the world believe they can survive climate change, too. Their emissions may be the cause of this catastrophic problem, but the poor are vulnerable. So, the rich do nothing to reduce emissions at the scale and pace needed. They are not victims, and they can “adapt”. They will build sea walls to keep out the next storm and they have enough food and money to buy their way out of the next drought or flood. They do not have to worry. Not seriously at least.

This is simply not true. The fact is that the rich may have the financial resources to cope with climate-related disasters the world is seeing today. But this is because global temperature increase is still only 0.8°C with another 0.8°C in the works. But this is before climate change spirals out of control when global average temperature increase gets to 3°C and above. At this level, even the richest will find it difficult to survive.

So, let us be clear that there is no escape route. We cannot run. We have to stay and fight. And we have to win. It is in the interest of all of us.

Post script: The school, I have been told, has gone ahead and bought air-conditioned buses. The literate Indians are clearly environmentally illiterate.