Overall, it is safe to assume that even if satellite images do not show a fire, it does not necessarily mean that nothing is burning on the ground

New satellite images have indicated an early onset of the stubble burning season this year in Punjab and Haryana (that usually starts in mid-October). This has triggered alarm bells about the possible return of winter smog. It is dangerous on its own but can combine with the novel coronavirus disease (COVID-19) to make one deadly concoction.

Scientific evidence suggests that even short-term exposure to air pollution can significantly increase vulnerability to COVID-19. Patients of COVID-19, living in areas with high air pollution, are more likely to die from the disease.

Data accruing from the latest satellite images has acted as a springboard for action by civic authorities and the courts. Given this, we at the Centre for Science and Environment’s Urban Data Analytic Lab (UDAL) have decided to analyse it in and determine if we are reading it correctly and moving in the right direction or need a course correction.

Eyes in the space

The satellite images have been captured by the National Aeronautics and Space Administration (NASA) and made public under their Fire Information for Resource Management System (FIRMS).

NRT data from both, MODIS and VIIRS, is useful for informing immediate disaster mitigation and management. But due to time constraints, the raw data is not processed to the fullest and NASA recommends not using it for scientific enquiry. FIRMS provides validated science-quality data as well, but with a two–three months lag from the time of satellite observation.

How fires are detected

Both MODIS and VIIRS detect fire by processing thermal imaging of the Earth’s surface but use different technologies and algorithms. MODIS uses a contextual algorithm that exploits the strong emission of mid-infrared radiation from fires.

The MODIS algorithm examines each pixel of the MODIS swath and ultimately assigns each to one of the following classes: Missing data, cloud, water, non-fire, fire or unknown.

In contrast, VIIRS uses radiometric signals from four micron, 11 micron and a few other bands for detection. It uses a hybrid threshold and contextual algorithm that identifies thermal anomalies. It uses a suite of tests for internal cloud masking and rejection of false alarms.

Each red dot or hotspot on the FIRMS map represents at least some fire. But it can be more than or even less than one fire. Confusing? Let me explain.

The number of red dots on FIRMS is not actually the real count of fires but an indication of the presence of fire(s) within a particular area (1 km x 1 km for MOIDS and 375 m x 375 m VIIRS). A red dot can be one single instance of fire or multiple fires, at times a single big fire can appear as a cluster of multiple red dots 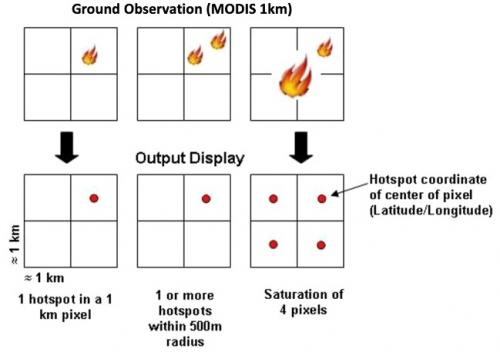 Note: The mechanism described is for MODIS. VIIRS mechanism only differs in the size of the observation grid. Source: NASA FIRMS

The VIIRS data complement the MODIS fire detections but the improved spatial resolution of the 375 m data provides a more accurate picture and has improved nighttime data-collection performance.

Can this data be wrong?

The data is not wrong but it is susceptible to errors and its interpretation is subject to multiple caveats. For instance, NASA notes that a few VIIRS active fire hotspots are occasionally located outside the reported perimeter of a large fire.

VIIRS have been routinely found guilty of categorising areas with no surface fires as active fire hotspot. This has been reported in instances of large and intense wildfires when the VIIRS instrument detected the surface fire along with part of a super heated plume (outside wildfire) and categorised all of them as active fires.

NASA recommends that if this happens, one may need to look for additional clues to see if it is a data artifact.

There have also been instances when both, MODIS and VIIRS, fail to detect a certain fire. This can happen due to several reasons: A fire may have started and ended between satellite observations. Cloud cover, heavy smoke or tree canopy may completely obscure a fire. Instruments may have become inoperable. Or a fire may have been too small or not hot enough to be detected.

Overall, it is safe to assume that even if satellite images do not show a fire, it does not necessarily mean that nothing is burning on the ground. When they show a red dot or an active fire hotspot, there certainly is a strong fire burning on the ground directly at the spot flagged or nearby (geo-location accuracy is poor for NRT data). NASA data has a tendency to exaggerate the magnitude of the fire in its NRT data, but not significantly.

(With inputs from Shubham Srivastava)

This is the first in a two-part series. Watch this space for the second part