Dahej chemicals factory blast: Is it another case of negligence?

Chemical industries usually neglect the availability of skilled workforce and operate with untrained employees, despite knowing the hazardous nature of toxic chemicals

The impact of the Dahej blast was felt several kilometres away. Smoke had emerged from the factory

The impact of the explosion was felt several kilometers away, as window panes of buildings far from the factory, cracked. Thick smoke was seen emerging from the plant as well.

The administration evacuated 4,800 people in two villages near the factory to avoid further loss of lives, as a precautionary measure.

The industry manufactured more than 15 chemicals, most of which are toxic and have both environmental and health hazards. Some of the chemicals include 4-Amino Benzonitrile, 2,4,5-Trichloroaniline, 4-Nitrobenzonitrile and 2,3-Dichloroaniline.

Delhi-based non-profit Centre for Science and Environment (CSE) reached out to government agencies, including the Gujarat Pollution Control Board (GPCB), Director of Industrial Safety and Health (DISH), Bharuch and the Gujarat State Disaster Management Authority (GSDMA).

There were eight to nine chemical storage tanks, out of which two or three contained solvents used to prepare chemicals, according to a preliminary investigation by the three agencies.

While the agencies said the explosion emerged from these tanks, the real reason has not yet been ascertained by them. Accounts of the incident, however, were given by officials of all three agencies.

A representative of the GPCB said it was not clear which tank exploded and what caused the blast.

The official said it was possible chemicals in the factory were mishandled (either due to human error or negligence of management) because skilled labour was unavailable as a result of the nationwide lockdown to curb the spread of the novel coronavirus disease (COVID-19).

The official said the concentration of volatile organic compound (VOC) in ambient air increased to more than 1,000 parts per million (ppm), several times higher than the limit value (5 microgram per cubic metre = 0.002 ppm), in the downwind direction of the industry.

The impact of the explosion was such that two contractual workers at an effluent treatment plant in the premises of Thermax Ltd (next to the Yashashvi Rasayan complex) died after debris from the explosion reached them.

The temperature in one of the solvent tanks in the storage area increased due to high ambient temperature (around 40 degrees Celsius), resulting in vapourisation, said an official from DISH.

A vent line is available on top of the storage tanks for vapours to exit. Pressure began to build up inside the tank, however, either due to a flash fire in the line or choking of the vent. This possibly resulted in an explosion. 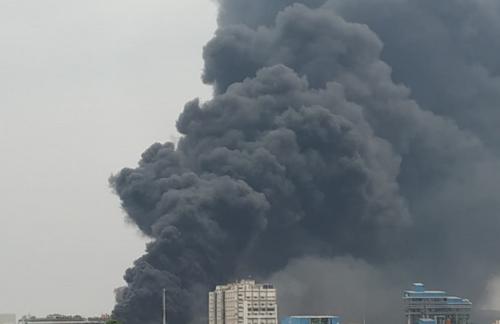 While government agencies said the explosion emerged from the factory’s tanks that contained chemicals, the real reason has not yet been ascertained by them

The industry resumed operations on April 5, 2020 amid the lockdown and operated for about two months. The possibility of this incident being a direct result of the lockdown is, thus, less.

The operation of the factory with reduced man power and skilled labour, however, has emerged as one probable reason for the explosion.

The question here is why chemical industries neglect the availability of skilled workforce and attempt to operate with untrained / new employees, when they are aware of the toxic and hazardous nature of the chemicals that need to be handled.

There is, undoubtedly, a neglect for safety norms in industries. How is it that nobody in the control room raised the alarm when the pressure in a tank shot up? Was the periodic inspection of the tanks to check pressure and temperature parameters — critical for a chemical industry — being done?

From Visakhapatnam (where styrene gas leaked from a plant, killing eight) to Dahej, it should have been understood that health and safety of workers must be a priority for the industries.

But it is seen that this was easily negotiated by industries.

Are labourers handling these chemicals made aware of risks and given proper training and awareness before being allowed to work?

It was emphasised by CSE during the Visakhapatnam incident as well, that proper standard operating procedures and safety protocols must be followed by industries, especially in the current scenario when there is less skilled workforce.

Provision of heavy penalties on industry should also be a part of regulations.

The National Green Tribunal fined LG Polymers Pvt Ltd, the owners of the plant in Visakhapatnam, with an initial amount of Rs 50 crore. A similar penalty should be levied on Yashasvi Rayasan Pvt Ltd as well.

Regulators were only able to give show-cause notices and report matters to the court. They did not have any administrative power, something that can allow them to levy fines on industries.

This aspect limits the working of state pollution control boards (SPCBs) and impacts the overall inspection process. CSE recommends rectifying the current system, allowing SPCBs to have both criminal and civil powers to prosecute erring industries.

Proper compensation to families of the deceased and injured workers should be given by the industries. The Public liability Insurance Act, 1991 also imposes a no-fault liability on the owner of hazardous substance and requires the owner to compensate victims of any accident, irrespective of neglect or default.

We need industrial development for the growth of the country but not at the cost of human lives.

Past incidents clearly show us the importance of skilled workers. Industry owners should learn to value the lives of their employees, otherwise similar incidents can occur.