POSCO: take land but give life 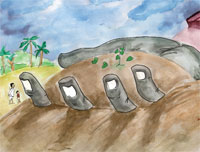 The sight on television was heartbreaking: children lying in rows in the searing sun to be human shields against the takeover of their land for Korean giant POSCO’s mega bucks project. Facing them were armed police sent by the state government to assist in the operation.

The steel plant and port project, located in a coastal district of Odisha, has been in a six-year-long eyeball-to-eyeball battle with people whose land will be acquired. Now with clearances coming through the state government wants the land acquired, at whatever cost it seems. It has put a financial offer on the table, which even pays for encroached government land. It believes this is a lifetime offer people should now accept. Move on, let the project be built and precious foreign investment come to the shores of this poor state.

The question we need to ask once again is why people who look so obviously poor are fighting this project. Why won’t they accept the financial compensation, which gives them an opportunity to start a new life and spare their children the drudgery of growing betel nut? Is it growth and development versus environment or just uninformed, illiterate people or even politically motivated agitators? Is it really as simple as that?

I am afraid not.

POSCO is about growth versus growth. People here are poor but they know that this project will make them poorer. This is the fact that we in the modern economy find difficult to comprehend. This is an area of betel farming done on mostly forestland belonging to the state. Of the 1,620 ha needed for the project 90 per cent, or 1440 ha, is this contested forestland.

When the project site was selected, government did not consider it would have to pay compensation for this land—it was encroached upon by the people, and government would simply take it back for the steel giant. But it was forestland and the people who lived there had cultivated on it for as long as they could remember. This then raised the tricky matter of the conditions under the Forest Rights Act that require people to give their consent to the project. The Union Ministry of Environment and Forests overruled its own dissenting committee to say it would have to trust the state government’s version that all procedures were followed in determining that people in these villages were not entitled to this right to decide because they were not traditional forest dwelling community.

With this sorted, environmental and forest clearance was granted. Land acquisition for the project could proceed. But people who were not asked still said no.

Why? After all, the state government says it has accommodated all demands in its offer. It has agreed to limit the acquisition of private dwellings and village land. People will still have homes; they will only lose livelihood. But even that will be compensated. It has agreed to pay for the loss of the use of forestland, even though technically people have no rights over it. The farmers will be paid, according to field reports from Odisha, some Rs 28.75 lakh for each ha of “encroached” betel farmland. Then the package includes provision for payment to wage earners, who will lose livelihood when betel farms go. The severance pay has a sweetener. The government will pay a stipend, limited to a year, for the period people look for “jobs”. In addition, the 460-odd families who lose homes will be resettled in colonies. So why is the generous offer being rejected?

Is it only because of the obduracy of a few people, namely the leaders of one gram panchayat, Dhinkia? This village has locked out the administration for the past three years. All roads to it are barricaded. It is a mutiny, fierce and determined. This village holds out alone because its gram panchayat covers some 55 per cent of the land earmarked for the steel plant, its captive power plant and its private port project. Two other gram panchayats are involved, but their loss is smaller and their leadership is not so strong. But my colleague who visited the residents of the villages waiting in a transit camp for their new houses to be built and handed over, found discontent brewing. Where is our livelihood, people asked? What will we do?

These questions are at the core of the battles raging across the country wherever land is being taken for development but people are losing livelihoods. In yet-to-be POSCO-land, betel farming earns Rs 10-17.5 lakh per ha per year. The compensation is equal to two to three years of earning. In addition, there is the earning from paddy, fish ponds and fruit trees. This land-based economy is employment-intensive. The iron and steel plant, however vital for the nation’s economic growth, cannot provide local employment. For one, local people are not “employable” in such a plant. Two, this modern state-of-the-art plant needs only a limited number of people in its operations.

POSCO is then about growth versus growth. It is just we who have discounted this economy of the land for so long in our understanding of what works and what matters. It is just we who have forgotten that development cannot be development if it takes lives of the very people for whom it is meant. The message is clear: if we want their land, we will have to give them a life.