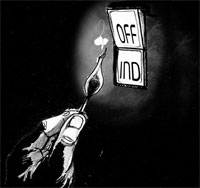 The power blackout in northern India on two days should not be dismissed or misjudged. Analysts are jumping to conclude that the crisis was foretold. They blame delays caused by environment and forest clearance procedures and demand winding down the regulatory framework so that we can re-energise ourselves. Their other favourite whipping horse is ‘free’ electricity to farmers, which is said to be crippling the state electricity boards. These explanations are naïve and mistaken. India’s power sector does need urgent reform, but first we need to know what to fix.

Firstly, data analysed by the Centre for Science and Environment clearly shows environmental clearance is not an obstacle to power infrastructure. In fact, the pace and scale of clearances given to power plants are a jeopardy for the environment. In the five years preceding August 2011, 267 thermal power plants adding a total of 0.21 million megawatt (MW) were cleared—capable of more than doubling the current capacity.

It is also incorrect that green clearances are holding up India’s coal production. Clearances have been readily given. But the problem is that Coal India Limited is a monopoly player and sits on 0.2 million ha of mine lease area, including 55,000 ha of forestland. Its reserves are some 64 billion tonnes, but production lags at only 500 million tonnes per annum. As a result, every power producer wants a private coalmine and forests can be dug and destroyed.

Secondly, the matter of ‘free’ power to farmers needs more enquiry. The recent Report of the High Level Panel on Financial Position of Distribution Utilities, headed by former auditor general V K Shunglu, finds huge anomalies in data used to estimate 20 per cent usage by the agriculture sector. For instance, Jammu and Kashmir, where transmission and distribution losses (T&D) are as high as 70 per cent, estimates that farmers use 28,000 units per pumpset; in Rajasthan too, where losses are high, farmers consume 11,000 units per pumpset. But Tamil Nadu, with lower T&D losses of 15 per cent, shows just 5,300 units used per pumpset. The panel concludes that states hide inexplicable power losses in farmers' accounts. There is, thus, no reliable estimate of power used by farmers.

However, it cannot be argued that agriculture should get ‘free’ power. There is no doubt that farming needs to be energy-efficient, and that ‘free’ power adds to the mindlessness in resource use. But if farmers must pay for power, then the government must account for its price in the cost of food. Currently, India is caught in a double bind. We need to procure large quantities of foodgrains to meet the needs of large numbers of people. The government must keep food production costs as controlled as possible. But input costs—labour and energy—are increasing. The minimum support price—which has seen a much-needed increase in recent years—does not keep up with this cost hike. So, farmers lose out. Free energy to farmers is not the question. The price of growing food in a globalised and subsidy-distorted market is.

So, why the power crisis? The reasons are deeply systemic and extremely worrying, First, there is no doubt that supply is constrained. In the past some years, governments have built power infrastructure at a feverish pace. But without much thought. As a result, today, India produces more electricity than previous years, but all this comes from coal-based thermal plants. Between April 2011 and June 2012, according to the Central Electricity Authority, hydro—needed as peaking power—was down by almost 9 per cent because of poor rainfall and low water flows. Gas-based generation fell by 20 per cent in the same period. Starved of raw material, power plants operated at m 47 per cent efficiency—compared to the projected 90-100 per cent.

So, raw material supply for all kinds of power (not just coal) is an issue. Hydropower needs water as raw material, not concrete structures on rivers. Currently, states have the perverse incentive to call for bids for projects—regardless of whether these will generate energy or not. Arunachal Pradesh has, for instance, tendered out some 54,000 MW of hydel power—every stream in the state has been sold to one company or the other. The situation is not very different on the Ganga or other rivers. There is no assessment of availability of the water needed for energy generation, let alone crucial functions like ecological flows.

Natural gas-based power with advantages over coal— it is environmentally cleaner and quicker to install—is also badly stuck. Reliance Industry, another monopoly, is sitting on reserves and not drilling fast or enough. It wants revision of tariffs and will not play ball till that happens.

Supply is one constraint. The more serious issue is our inability to pay for power. This is not just because power utilities are so inefficient that they cannot recover bills or keep track of their energy supply. It is also because energy cost is already high in India and will get even more expensive, and so even more inaccessible for the poor. In this situation, how will we work through our energy future? Let’s discuss this next fortnight.