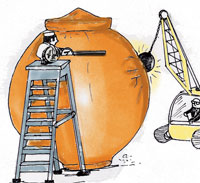 Growth is back on the agenda, says the government. It is hoping that with pushy announcements foreign and Indian investment will miraculously start pouring in and infrastructure will be the name of the game once again. But this assumption ignores one crucial detail: currently, public-private partnerships (PPPs) in infrastructure are on the cusp of disaster. The country needs a different strategy to build public services infrastructure.

This is because in India, which has a large population of poor and relatively poor middle-class, public infrastructure has to be affordable to build and to run. But since we do not think about the nature of the asset we need to build, we make standard, capital-intensive infrastructure plans in the hope that someone will cough up funds to build. This then justifies the need for private investment. But in reality little private money comes. Worse, the private player is unable to run the public asset—be it water supply, public transport or a swanky airport—without substantial recurring funds. So the private sector’s interest is to make profit by building the infrastructure and then stay clear of the responsibility of making the system work. In this way PPP stands for public investment and private profit.

Take water and sewage. The country has a huge infrastructure backlog in this sector. The High Powered Expert Urban Infrastructure Committee, set up by the Union Ministry of Urban Development and headed by economist Isher Judge Ahluwalia, came up with a mouth-watering estimate for this sector. According to its estimate, building water, sewage and drainage infrastructure requires Rs 5,70,000 crore over the next few decades. In the past five years, the Centrally sponsored Jawaharlal Nehru National Urban Renewal Mission that has been a game-changer, pumped in some Rs 43,000 crore in water and sewage infrastructure. But this is far below what is needed in a country with a backlog and an exploding “front log”—out-of-control urban growth that needs services fast.

The need for finances to build the public water and sewage infrastructure of the present and future is apparent and urgent. But the fact is that private partnerships in this sector are going horribly wrong. It is always a sign of trouble when experienced players sit out and new fly-by-night-type operators take control. In the case of this sector, this is exactly what is happening. We should ask why.

In cities where water supply (never sewage) contracts have been awarded, private parties are realising they underestimated the capital cost of building infrastructure. The reason partly lies in the way contracts are designed. The detailed project report is made by one party to estimate costs and bids are tendered on this basis. This works when the quality of existing assets is known or when the work is for a standard design specification. Since that’s rarely the case, the bid is opened and the lowest bidder succeeds, even if he is wide of the mark in terms of costing.

The situation is made worse by the fact that there are few players with experience or expertise. So there is an opportunity to make deals to “share” the market. The recently opened bids for water distribution in certain pockets of Delhi is a case in point. All bids had one common Indian player—Subhash Projects—with combinations of foreign players. But once such projects get off the ground, they are unfeasible, hence negotiations begin. Private concessionaires ask for changes in the awarded contract. One by one all the original conditions are done away with in this mother of all scams. Read the Comptroller and Auditor General of India’s report on the implementation of PPP in the case of Indira Gandhi International Airport to know the game.

All this could even be justified (especially by the growth-at-all-costs proponents) if the project ends up getting private equity and delivers the goods and services to people. But in the water-waste sector private investment is a chimera. In Shivpuri where Doshion-Veolia and in Khandwa where Vishwa Infrastructure have been awarded projects to ensure 24x7 water supply, 90 per cent of the investment is public. In return for the 10 per cent capital investment, high tariffs have been fixed in this relatively poor region. The catch is that the operator must recover money from operation and maintenance. Given that the state of supply is unreliable and full of holes, the meters faulty and collection difficult, it is near impossible to break even in the business of supply. Everybody, including the concessionaire, knows this. The profit, therefore, is in building the project—in the cement, steel and pipes. It is not in the water that is to be supplied.

What is worse, these projects cream off the most lucrative part of the sector—water supply—and leave the expensive sewage, waste collection business to the stretched municipal supply system. The system crumbles further because now it does not even have the money from water to pay for sewage—and remember 80 per cent of the water leaves homes as waste. The public system takes a further hit and the private system does not benefit. Development does not happen. What happens is loot in the name of growth.