Delhi has been awfully late in adopting open source software, but the policy is finally there

It has taken the government of India a decade and more to grasp a basic truth—that open source software (OSS) is the way to go. March-end, the Information Technology (IT) ministry unveiled, finally, a policy for adopting OSS as the preferred option in all e-governance systems implemented by various government organisations. The policy, which makes it mandatory to adopt OSS, is intended to lower costs and ensure strategic control of these systems. It says the aim is to ensure “efficiency, transparency and reliability of such services at affordable costs”. Sigh.

All one can say is that it’s been a long, long learning curve for Delhi. Organisations and governments across the world have switched from proprietary software, such as those provided by Microsoft, to OSS not merely to cut costs (hugely) but to have control of their operating systems by reducing dependence on vendors. It allows better inter-operability of systems, is easier to customise and also helps promote the development of systems in local languages. If only IT ministry officials had cared to look at what was happening in one corner of the country it may not have taken them so long to formulate a policy on the use of OSS in its various arms. 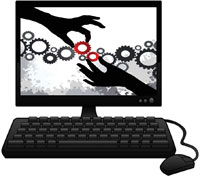 Kerala is the not-so-far corner where OSS or FOSS (Free OSS), as it’s also known, was recognised as the path to the future in 2001. It was the first state to include the use of OSS in its IT policy. It ought to be made clear here that free here does not mean free of cost but free to use as the developer wishes. FOSS as a radical paradigm to democratise knowledge came into its own a little later in 2007 when the Marxist government of V S Achuthanandan made the considered decision to use this platform to build an egalitarian knowledge society. The goals were enunciated in the title of the policy it issued: “Towards an Inclusive Knowledge Society”. By then prophets of the FOSS movement, notably Richard Stallman, had made many visits to Kerala, preached widely and laid the foundations for a philosophy that the state took to its heart.

Another leap came with the setting up of an International Centre for Free and Open Source Software (ICFOSS) in 2011 to popularise FOSS for universal use and network with different nations, communities and governments to jointly promote FOSS as “a powerful alternative to the monopolistic approaches to knowledge creation”. Its lofty charter and well-grounded work may have created waves globally but not a ripple appears to have touched Delhi.

In July last year, ICFOSS helped Kerala cross another milestone when it’s Legislative Assembly shifted to OSS for recording its huge volume of business. Commendably, the migration from Microsoft’s XP system was completed in a record three months, since the US software giant’s support services was set to expire in that period. The magnitude of the task can be gauged from the following: 500 pages of text are keyed in daily on average when the Assembly is in session and this is mostly Malayalam, a complex Brahmic script.

Should one applaud or lament Delhi’s belated discovery of OSS? Even if it had dismissed the Kerala path as a leftist experiment how did it fail to notice the shifts taking place the world over? Now, with a policy finally in place one can only hope OSS takes off rapidly in the country. And it could also provide a new lease of life to the government’s own Bharat Operating System Solutions which was plugged as an alternative to Microsoft’s Windows platform but found few takers for want of official backing and poor customer services. That should change.