Amidst talks of an undeclared drought looming over the country, monsoon makes its presence felt in central and south India

Amidst talks of an undeclared drought looming over the country, monsoon makes its presence felt in central and south India

The all India rainfall now stands 41 per cent less than normal in the period from June 1 to July 14. Although it's still a huge deficit but the situation has improved from 43 per cent less rainfall, as on July 11, to 41 per cent less. Out of the four meteorological divisions in India, the situation has highly improved in central India as the rainfall deficit came down from 63 per cent to 55 per cent and in southern India from 38 per cent to 29 per cent. This is due to a low pressure system from Bay of Bengal which brought very good rains to central India and continued to do so today. 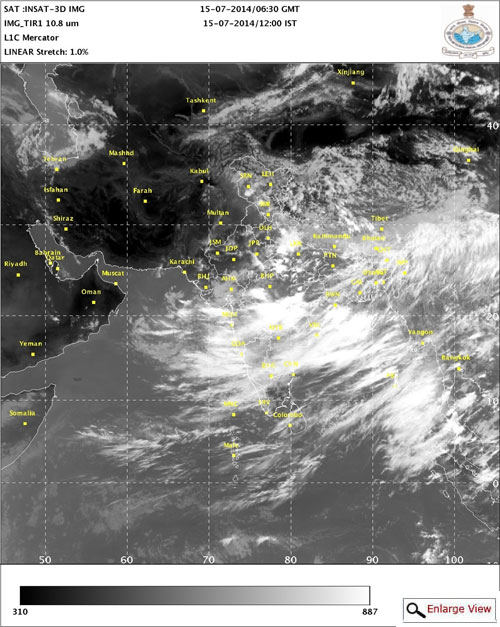 The rainfall situation will further improve in central India after the rainfall on July 15 is taken into account. The rains were a welcome relief after high temperature and humid conditions left citizens in north India sweltering; the temperature in New Delhi touched 44°C (at Palam Observatory) on last Friday (July 11) when Mumbaikars were soaking in heavy rains which flooded the city. Although thunderstorms and the associated rains since Sunday (July 13) have cooled north India,  the rainfall situation hasn’t improved that much as it slipped from 48 per cent less than normal to 53 per cent less. In east and north-east India divisions also the rainfall deficit increased from 20 per cent less to 25 per cent less than normal. The numbers will keep changing throughout the season but the good news is that there has been a 2 per cent increase in the rains in India.

This week, the low pressure from Bay of Bengal promises to bring good rains to the northern half of country, but once again threatens the Char Dham yatras in Uttarakhand.

Char Dham Yatra halted!
Rains are being reported from Uttarakhand and landslides have started troubling the Char Dham pilgrims. Expect more heavy rains and landslides in the Char Dham yatra route till July 19-20.  The threat of  rainfall has led to the yatra being stopped well in advance; a high alert has been sounded in the region to avert  rainfall-related problems.

Good rains expected in parched states
During every monsoon season, low pressure systems develop in the northern Bay of Bengal and due to the driving winds at high altitudes (which mostly blow from east to west), the systems move through central India and end up bringing heavy rains to the region. Gujarat, which has seen the worst phase of the monsoon till now, will see good rains till July 19, particularly on July 16 and 17. Good rains are expected in northern parts of Madhya Pradesh and surrounding areas of Rajasthan and Uttar Pradesh also. Good amount of rainfall is expected in other parts of Rajasthan in this period which has seen 70 per cent less rains till now. Till July 14, rainfall in Gujarat division, which includes eastern Gujarat, Daman & Diu and Dadra & Nagar Haveli, has been 91 per cent less than normal whereas it has been 75 per cent less than normal in Saurashtra and Kutch region in northern Gujarat. This deficit is expected to reduce because of good rainfall.

Expect rain and thunder in north India
While the monsoon hasn’t been that intense in north India, its marking its presence through short spells of rains from time to time. Once again, from July 17 to 19, thunderstorms and rains are expected in north India which are likely to reduce maximum temperatures to around 35°C. As a result, slightly hot but humid weather is expected in these areas, including Delhi-NCR. Rains will be a good news for the farmers in Punjab and Haryana in particular.

Rainfall will be continuing in north-eastern states of India this week also but a decreased rainfall is likely in southern India. Sikkim should get heavy rains and some landslides in this week,  something to watch out for.

Rains will be decreasing in central India, particularly Vidarbha and other parts of Maharashtra, from July 17 and there will be a rise in the temperature again. However, the ongoing heavy rainfall has brought smiles on the faces of farmers who were waiting eagerly for sowing season.