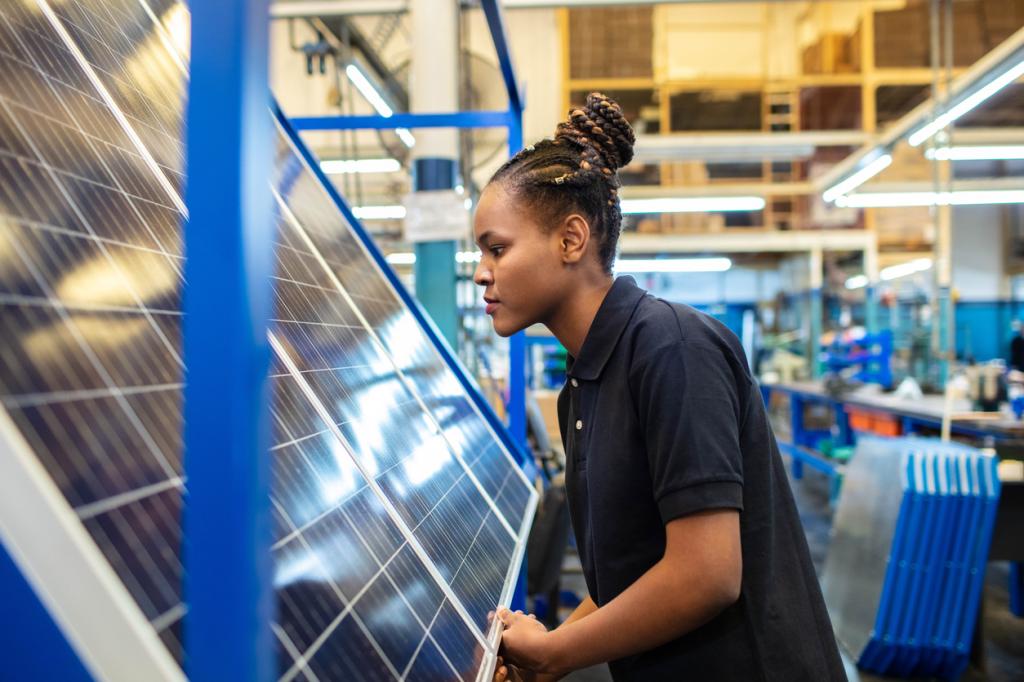 There is a need for more women in the energy sector for ingenuity and an all-encompassing viewpoint to transition toward a low-carbon economy. Photo: iStock

The energy sector is largely dominated by men. Advancing the transition to a low-carbon economy by increasing women’s participation in clean energy and closing the gender gap in the sector may help change that.

There has been a significant advancement in the past decade in closing the gender gap, but there are many reasons why women are less likely to start or maintain their profession in this sector.

Women’s challenges in the sector are almost akin to that encountered in any other. There is a need to have a mixed force at work for ingenuity and an all-encompassing viewpoint to transition toward a low-carbon economy.

Ending the gender gap and the higher engagement of women across diverse levels and sectors will spur countrywide growth and advancement.

Developing countries can ensure the expansion in gross domestc product by engaging women across diverse sectors and roles, transgressing the country to become an economic giant through increased women’s employment, says Abena Ampontuah Karikari, an engineer at Ministry of Energy, Ghana and Regional Lead (West Africa) – Women in Renewable Energy.

Energy transitions can have impacts on the gender gap and equal employment opportunity and compensation. The number of women engineers is quite significant in India and the number of women employed in the renewable energy sector is extensive.

Just about 14 per cent of senior managers in the sector are women, with the utility area having the highest percentage, an analysis by intergovernmental organisations Organisation for Economic Co-operation and Development (OECD) and International Energy Agency (IEA).

The Equality Initiatives Transitions is a technology collaboration programme working under IEA and the global forum Clean Energy Ministerial (CEM). This initiative aims to improve gender equality and bring forth divergence in clean energy transitions, as well as close the gap in gender disparity by 2030.

Increasing the share of renewables also means increasing the number of women employed in the sector. Modifying policies that ensure a safe and reliable place for women to work, along with housing and travelling facilities, would enable it to happen.

The countries with fewer prospects for women and greater disparity towards gender bias have shown modest economic growth, according to the Global Gender Gap Index 2021 of the international non-profit World Economic Forum (WEF).

In India, 22.3 per cent of women engage in the labour market, translating to a gender gap of 72 per cent. Scandinavian countries such as Finland, Norway and Sweden make up the top five, which have closed the gender gap by more than 80 per cent.

Such countries have the highest happiness index, with the rationale suggesting equal or increased engagement of women across all power hubs.

Read more: India’s gender gap in health, economic participation one of the worst in the world

India’s female labour force engagement has been falling, especially in rural areas, said a WEF report from 2020. Rural women are leaving their workforce sooner than women in urban areas.

This declining engagement of women has serious consequences for energy inequality in the following ways:

The total number of employers in 2021 in the industry was summed up to 4.3 million, which is almost equivalent to around one-third of the energy jobs globally, said the IRENA 2022 report. While women occupy 21 per cent and 22 per cent roles, respectively, in the wind and oil and gas sectors, solar PV had 40 per cent women participation in 2021.

Women account for about 11 per cent of the labour force in the rooftop solar division.

The limited/small workforce engagement by women in India can be attributed to factors such as pay disparity, absence of safety code and flexible work arrangements and the cultural background of the women.

Women in India are needed to give importance to domestic work by their families. Societal stereotyping happens against women who go out to work and is even more evident for those who can afford not to go to work.

Additional hindrances to reliable and economic mobility for women do not allow them an opportunity to avail health facilities, education and other quality services, thereby minimising their prospects of taking part in the labour force to the same level as men.

“The traditional energy sector has largely been dominated by males, probably because its roots lie in mining, drilling, and engineering,” said Ritu Lal, senior vice-president and head of institutional relations at energy distributer Amplus solar.

The transition to green energy provides an ideal opportunity to diversify the sector and increase the participation of women especially given the massive impact that accesses to clean energy has on women’s lives, Lal added.

Read more: #ShutItAllDown in Namibia: The fight against gender-based violence

Issues surrounding safety and reduced access to mobility limit the opportunity of women to participate in the market by 16.5 per cent, according to the International Labour Organization 2018.

Resolving the transportation issues for women is necessary for the equal engagement of the workforce in the energy sector.

Women have fewer chances of being registered as investors for patents in the energy sector, according to World Patent Statistical Database of Europe Patent Office.

The scenario is currently undergoing a drastic transformation in other technological sectors, with more than 20 per cent of women inventors in the health and chemical sector.