The Maharashtra government recently moved a resolution in the state assembly to repeal the Urban Land (Ceiling and Regulation) Act (ulcra), 1976. It will be taken up in the monsoon session of the assembly. Repeal of laws restricting land ownership is one of the requirements for states whose cities have been selected for fast-track development under the Centre's Jawaharlal Nehru National Urban Renewal Mission (jnnurm). The axe has fallen on ulcra.

The centre's decision to make jnnurm funds contingent upon the repeal of urban land ceiling act has, however, raised many eyebrows. Justifiably so. The legislation was enacted during the emergency, but it had the consent of all states. Land was--and is--a state subject, and it was felt then that the act would make it easy to provide affordable housing to all.

The enactment imposed a ceiling on the quantum of vacant land that any individual can possess in urban areas--in class A cities such as Delhi and Mumbai, this was 500 sq m. The excess land was to have been acquired by the government after paying the owners--at the rate of Rs 10 per sq m, with the indemnity not exceeding Rs 2 lakhs--and used to provide affordable housing. Providing housing to people with low-income levels, would hold down the skyrocketing realty prices, it was felt.

That, of course, has not happened. Affordable housing remains a distant dream. With public transport inadequate in most urban centres in India, a place of residence far from the work place is no option. But those servicing the affluent, cannot afford formal housing near their work place. So, slums and squatter settlements have proliferated.

With ulcra not serving its purpose, it was felt that the act should be repealed. But why did the act fail its mandate? It suffered because of various loopholes and faulty implementation. There were a host of escape routes for the landed. Exemptions given to land owners as incentives for building housing for lower income groups and other considerations and restrictions imposed on resale of vacant lands served the interests of a builders' oligopoly. 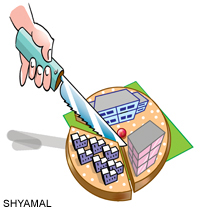 A detailed inventory of every acre of vacant land, that the government could have acquired in Mumbai is now available thanks to the Right To Information Act, 2005. About 12,500 hectares in excess of the ceiling specified by ulcra could have been acquired in Mumbai by the Maharashtra government at a cost of Rs 150 crores. Their current market price stands at about Rs 1,00,000 crore.

In a 2005 article in Economic and Political Weekly, V P Pathak--until recently town and country planner with the Mumbai Metropolitan Region Development Authority--surveyed ulcra's functioning in Maharashtra. "There is also reason to believe that developers have assembled the lands of individual landholders, whose land was subject to ulcra and managed exemption for their development," he wrote.

Pathak's argument explains why large number of constructions for the affluent have come up while there is virtually nothing for the weaker sections. It is quite possible that Maharashtra government now believes that developers have managed to exempt most of the land thought to be under ulcra's purview and so the act has been rendered redundant.

But the objectives of the urban land ceiling act might yet be achieved. In urban areas equitable distribution of land per se need not be the policy makers' aim. Instead they should try to provide affordable housing to all. This could be achieved by keeping real estate prices at reasonable levels by avoiding artificial land scarcity or enabling equitable access to housing finance.

Affordable housing could become a reality if all land--whether private or government owned--is taxed at the current market value, with lower taxes for built up buildings for housing tenements for the poor. It might be prudent to enact new tax laws and repeal the land ceiling act simultaneously. This will ensure jnnurm funds for infrastructure development and act as disincentive to land holders from not developing houses for low income groups.

Sudhir P Badami is a civil engineer. He also works on issues related to urban challenges such as transportation, noise and disaster mitigation