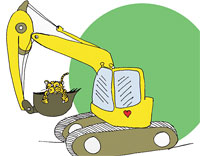 Can you love tigers but hate forests? This is the question that troubled me as I visited the middle of India last fortnight. I was in Nagpur, where local politicians, conservationists and officials were discussing what needed to be done in this chronically poor and backward region endowed with forests and tiger habitats.

The discussion began with tigers. Everybody wanted more money to protect reserves earmarked for this magnificent creature. The demand was unanimous that Nagpur should be declared the tiger capital of the country. The existing tiger reserves should be expanded; better protected; money should be paid to relocate families living in the tiger’s habitats and tiger tourism should be promoted. Clearly, there was an important constituency for the tiger, which in turn is important for protecting their forested habitat. Or so you would think.

Then the talk turned to forests. “All development has come to a halt. We cannot mine coal. We cannot build thermal power stations, roads, factories or irrigation canals. In each case we need to go to Delhi or to Bhopal (the regional office of the Ministry of Environment and Forests) because we need clearance from forest departments for each hectare (ha) of land that will be diverted.” Forests were suddenly the underlying reason for the lack of development, poverty and dissatisfaction. Tigers were loved, but forests were hated.

It is important to understand this reality. This is a region where in many districts over 80 per cent of the land is classified as forests. Throw a stone and it will hit forestland. Under the Forest Conservation Act, 1980, it was decided that the only way to stem rampant diversion of forests for development projects was to ensure that every file travelled to Delhi for clearance. Since the trip to Delhi was time-consuming, in 2003 it was agreed that in the case of projects requiring diversion of less than 40 ha of forestland the file would go to the ministry’s regional office.

No doubt this sternly worded legislation has been critical in safeguarding forests. Deforestation rates have come down. Cutting forests has become tough, as its diversion requires clearance on file, payment of its net value and funds for compensatory afforestation.

The flip side is that in this region the people have no use for forestland. They do not see the connection that if the forests go, the tiger cannot survive. Already, tiger populations are increasing but the contiguous forests, which allowed the territorial tiger to roam, are degraded or diverted to other uses. At this rate, the tiger will survive—because of the huge investment being made for its protection—but in increasingly smaller zones. This is the zooification of the tiger, bounded not in city zoos but in reserves surrounded on all sides with high-level firewalls.

This is the tragedy of our forests. There is no value for the tree, but only for the land below it—for mining or development. The people who live in forests are neglected and impoverished, caught between lack of development and the hateful stick of the forest guard. Small wonder Naxalites are taking advantage of this anger.

How can one maintain the balance between forests and development? In my view, it requires a drastic rethinking of what we mean by development and re-positioning forests in that development strategy. Let me explain.

Conventionally, the only way regions can develop is by cutting forests and building all that is known as infrastructure and signifies economic growth. This is what all of us living in non-forested zones have done. We have cut forests, then cultivated land and built factories and cities. We are rich because we have cleared the forests. Now how does a forested region grow with its forests, and become rich?

At the moment India has a provision to pay the “net present value” of forests while felling trees. In other words, we pay to cut. But there is no payment for standing forests. There is no value for this resource. For many years, chief ministers have been demanding that they be paid to protect forests. Finally, the 12th Finance Commission, in 2004, agreed that states must be paid for the maintenance of forests—some Rs 1,000 crore between 2005 and 2010. Very little money, but the principle was established. However, nothing really happened. In 2010, the 13th Finance Commission reiterated the need to compensate states and enhanced the allocation to Rs 5,000 crore over the next five years. But still the money has not been provided. Equally important is that this money must go to the people who live in the forested regions. It is their burden that must be rewarded. This is the first step.

But it is not enough to protect forests; we have to use them as well. This is the big challenge: to sustainably use the resources to build green wealth. Currently, the productivity of our forests is pathetically low. This is partly because we do not know how to plant and cut and then grow again, in the face of enormous human and animal pressure on our forestland. So we plant, but regeneration is low. We cut, and then the land is degraded. How then can we build a green forest future? How can we turn our forests into assets? Let us continue to discuss this.