Union government is set to introduce The Prohibition of Employment as Manual Scavengers and their Rehabilitation (Amendment) Bill, 2020, in ongoing Monsoon Session of Parliament 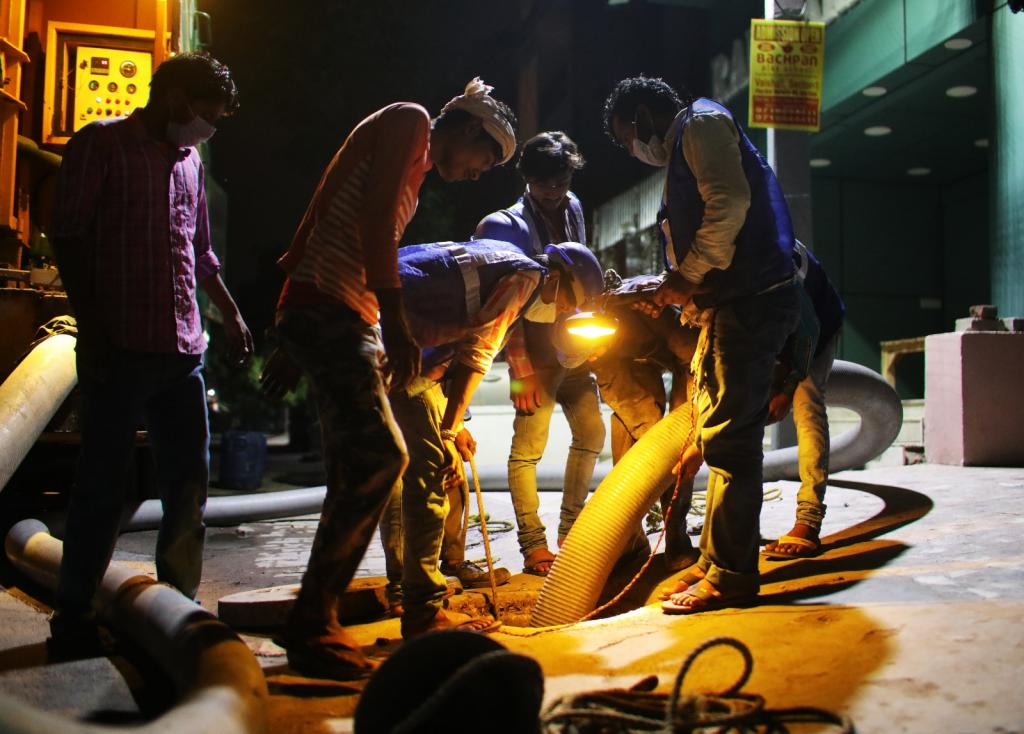 The Union government is set to introduce The Prohibition of Employment as Manual Scavengers and their Rehabilitation (Amendment) Bill, 2020 in the ongoing Monsoon Session of Parliament. The Bill proposes to completely mechanise sewer cleaning, introduce ways for ‘on-site’ protection and provide compensation to manual scavengers in case of sewer deaths.

The Social Justice and Empowerment Ministry’s National Action Plan under the Union government not only seeks to make the existing laws tighter, but also eradicate the practice through a better faecal sludge management system.

This Bill will be an amendment to The Prohibition of Employment as Manual Scavengers and their Rehabilitation Act, 2013. It will make construction of insanitary toilets an offence and will call for their rehaul.

It will also ban employing people as manual scavengers without protective gear.

In 1955, the Protection of Civil Rights Act called for the abolition of scavenging or sweeping on grounds of untouchability. This was revised in 1977 for a stricter implementation. The centrally sponsored scheme of low cost sanitation for Liberation of Scavengers (ILCS) began from 1980-81 for the conversion of dry toilets into pit toilets through integrated low-cost sanitation scheme.

In 1989, the Prevention of Atrocities Act became an integrated guard for sanitation workers; more than 90 per cent people employed as manual scavengers belonged to the Scheduled Caste. This became an important landmark to free manual scavengers from designated traditional occupations.

The provisions of constitutional validity to municipal governance in India and categorisation of urban local bodies through the 74th Amendment Act, 1992, made India’s sanitation structure more concrete. It was only in 1993, through The Employment of Manual Scavengers and Construction of Dry Latrines (Prohibition) Act, that a stricter stance was taken against employing manual scavengers. But the Act had its limitations.

In 1994, the newly constituted National Commission for Safai Karamcharis (NCSK), a statutory body made by the same Act of Parliament, 1993, was made and was valid up to 1997. But it was later extended indefinitely. In 2000, NCSK submitted its first report stating that there was a big gap in the implementation of the 1993 Act on the ground.

Since then, various organisations such as the Safai Karmachari Andolan (SKA) and National Campaign on Dalit Human Rights (NCDHR) have been working to eradicate manual scavenging. The practice, however, continues because of loopholes in implementation of these laws.

In 2002, the Ministry of Social Justice and Empowerment came up with a report stating that over 79 million people were engaged in this practice.

In 2003, the CAG’s report on the evaluation of the ‘National Scheme for Liberation and Rehabilitation of Scavengers and their Dependents’ stated that the 1993 Act “has failed to achieve its objectives even after 10 years of implementation involving investment of more than Rs. 600 crores”.

This was taken up by SKA along with other organisations and they filed a writ petition seeking strict enforcement of the implementation of 1993 Act.

In 2007, the NHRC called for a national coordination for adoption of the Act to all the states of India. In the next 10 years, several assessments by the government and civil society organisations for the quantitative establishment of manual scavengers took place.

Organisations such as Garima Abhiyan have repeatedly called for broadening of the definition of the manual scavengers by including the sanitation workers employed to do the same job on the railway platforms.

In 2013, the Parliament passed the Prohibition of Employment as Manual Scavengers Act, 2013, with a greater emphasis on rehabilitation.

This is not the first time a Bill on the practice of manual scavenging has introduced proposals of mechanisation of sewer cleaning; as early as 1956, the Kaka Kalelkar Commission emphasised on the immediate mechanisation to eradicate the ‘sub-human’ level of practice.

This was seven years after the Barve Commision suggested looking for measures to improve the lives of manual scavengers in India. Subsequently, many Committees (Central and State) including the Pandya Committee sought recommendations to regulate the service conditions of the manual scavengers.

One important aspect of the Pandya Committee (1968) was the “inspectoration of the enforcement machinery with regards to existing regulations.”

There have been many important policy and legal frameworks in India demanding a similar aspect of other previous frameworks and schemes. This has resulted in a handful of similar schemes that have failed in reaching their target because there is hardly any materialistion on the ground.

One of the examples is the Kashi Ram Shahri Awas Yojna which was a politically motivated overlap of the core of the Valmiki Ambedkar Malin Basti Awas Yojna in Uttar Pradesh aimed to provide sheltering opportunities to the people below the poverty-line categorisation.

There is an immediate need to redefine manual scavenging with an emphasis on categorisation of sanitation workers.

The Amendment Bill should take into consideration the composition of the hazardous waste, including bio-medical waste, which the different categories of sanitation workers are forced to scavenge ‘manually’ and which is no less than scavenging human excreta.

Another reason for the lack of implementation of the existing laws relating to the manual scavengers is the gap between the integration of the sanitation campaigns and schemes emphasising on the infrastructure part and workers’ front which leads to the complete disregard of the rights of the workers.

While the budget of these campaigns (such as Swachh Bharat Abhiyan) is huge, the declaration of a city / settlement being open defecation-free and building of the toilets is given more importance than understanding of the complete integration of the sanitation system which includes the structural maintenance of these toilets.

Even today, some of the rural settlements in India lack proper water supply because of which people are forced to manually remove excreta from the toilets that have become a landmark of ‘good hygiene’ and ‘successful sanitation’ practices.

Moreover, the complexity of procuring loan through different schemes of NSKFDC further alienates them from taking loans for restoration and rehabilitation. It has also been found that the rehabilitation scheme SRMS “has had significant gaps noted between budget estimates, revised estimates and actual expenditures.”

The Amendment Bill should draw from the many health assessment reports of the sanitation workers and the manual scavengers in public domain (Human Rights Watch, WaterAid etc) to establish concrete measures for the protection of the health of manual scavengers. There is an immediate need for proper guidelines to tackle the “health of a manual scavenger in its centrality.”

This should not only include trials and testing of protective gears, but also provisions for better healthcare facilities, insurance cover, pension plans and regulations on preventive and social medicine education for the manual scavengers.

A few existing guidelines in the previous bills regarding compensations should be revisited with stricter enforcement of on-ground implementation.

The Amendment Bill should seek evaluative reports from numerous bodies on provision of compensation in all previous cases of sewer deaths. It should also enquire the current grounds of assessment and delivery of compensation with the central question: ‘Why have certain cases not received compensation till now?’

The most important aspect of the Amendment Bill should be to highlught accountability shortfalls in cases of sewer deaths.

The ‘Contractual employment system’ needs to be reassessed. It has to be also noted that unregularised contractual hiring makes the eradication of manual scavenging more difficult than ever. This makes the sanitation workers more vulnerable.

There have been cases where a particular sanitation worker has never entered a septic tank before, but the contractual employers have been found to force the sanitation workers to do so without any protective gear or prior understanding of the problematic nature of this work.

The Amendment Bill should also address a proper mechanism for easy legal help in both cases of death and legal redressal and consultation otherwise.

The Amendment Bill should also highlight the importance of trade unions, self-help groups, co-operatives and pressure groups in the fight against eradication of manual scavenging by giving incentives to the sanitation workers who are a part of an umbrella of protection.

This will help in safeguarding the interest of the workers as they will understand their rights, fair wage structures, policies, entitlements, restoration and rehabilitation measures, etc.

There are a lot of expectations with The Prohibition of Employment as Manual Scavengers and their Rehabilitation (Amendment) Bill, 2020. Mainly, because it has been a ‘discreet bill.’