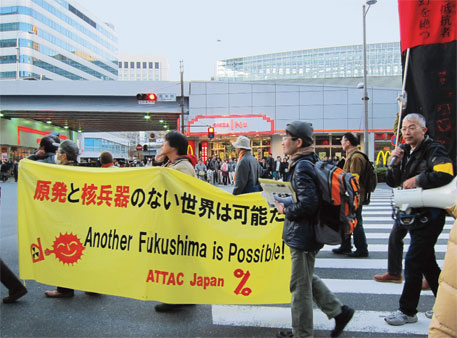 There are lessons to be learnt from Japan, given the dilemma it finds itself in. Should it continue running its 50 nuclear power plants or do away with them within a specific time frame? Opinions, after the Fukushima disaster, are sharply divided. The latest attempt by the Japanese government to chalk out a roadmap to end its dependence on nuclear energy has only led to more confusion. Once you are in the thick of a nuclear programme—Japan derived 30 per cent of its electricity from nuclear energy—exit options become more than difficult.

On September 14, Japan released a policy, Revolutionary Energy and Environment Strategy, which seems to suggest that the country would forsake nuclear power by 2040. The emphasis was on not to build nuclear power plants, to restrict the age of power plants to 40 years with no option of renewing licences, and allow only those that are deemed safe. But five days later, the Japanese Cabinet stopped short of endorsing the new policy. On the same day, a senior minister of the Cabinet made a vague statement that the government will “still act” based on this policy.

On the face of it, it seems the government is caught in a double bind with pressure exerted from both the pro- and anti-nuclear lobbies. Throughout summer, anti-nuclear protests were staged outside the Prime Minister’s office. On August 22, after a week of demonstrations, Yoshihiko Noda met a group of protestors in his office, which was termed “victory” by the group. Meanwhile, Keidanren, the Japanese industry federation, has called the nuclear roadmap “unrealistic and unreachable”. But nobody seems to be happy with the current policy flip-flop.

Public opinion polls conducted by one of the two most popular Japanese newspapers, Asahi Shimbun, found that more than two-thirds of the respondents were not confident about the safety measures initiated by the government to protect nuclear plants post-Fukushima. Only one per cent were confident about the measures, found the poll conducted in August. Interestingly, majority of them said they had more confidence in renewable energy, like wind and solar power, than in nuclear.

But public perceptions alone will not sway the government. Before any decision is taken, there are several issues that need to be resolved. This includes cost of switching to other forms of energy, foreign policy (the US is Japan’s closest business ally), nuclear waste reprocessing (it is done mostly in foreign land like France and the UK), carbon mitigation targets and future of close to 45,000 people that the nuclear industry employs.

Nuclear is like a bad habit difficult to get rid of. Closed nuclear plants do not mean zero nuclear. Japan would have to deal with its high grade nuclear waste, which was once foreseen as an unlimited resource for future generation. Media reports say that the stockpile is more than 45 tonnes of plutonium that can power 5,000 nuclear missile warheads. Most of the light water reactors in Japan produced this as a by-product. Of this, a huge chunk is kept in France and the UK. But both these countries are unlikely to hold on to this extremely toxic substance once Japan decides to exit the club. According to media reports, after the announcement of zero-nuclear policy British Ambassador to Japan Sir David Warren visited chief Cabinet secretary Osamu Fujimura to get an assurance that Japan would take back the containers of nuclear waste from its soil. The French are planning a similar request.

If returned, where will this waste go? At present, the Aomori Prefecture in Japan is used as the temporary storage facility for nuclear waste. But this arrangement cannot go on forever. With popular opposition against nuclear, no prefecture will allow more storage space to be built.

Japan’s dilemma does not end there. To build renewable power and a grid around it, the government estimates a spending of US $622 billion, something that will not happen overnight. Since the closure of nuclear plants after Fukushima, Japan has been mostly relying on imported gas from the US; its gas imports has increased by close to 20 per cent. With renewed dependence on fossil fuels, even if temporarily, meeting climate change targets of reducing emissions by 25 per cent below 1990 levels seems far-fetched. If Japan wants to meet these targets, as Bloomberg Businessweek reports, it will have to buy emission reduction credits to the tune of 320 million tonnes.

Will Japan’s nuclear woes ever end? Are there any lessons for nuclear power wannabes? Either way, Japan finds itself caught between the devil and deep sea.