Scarred by violence and fundamentalism

1992 proved the Indian women's movement needs to reassess its priorities and strategies. 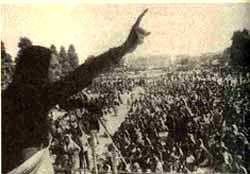 THE INDIAN women's movement faced several challenges last year: continued violence against women; the effects of the new structural adjustment policies on women's status; the question of political power for women; issues of health and population policies; and the threats posed by religious revivalism to women's rights.

Protest against violence was the impetus for what is today known as the "second wave" of women's struggles. It had been a dominant issue in the 1970s and 1980s and continues to be one during the 1990s. Rape, especially child rape, figured prominently this year.

But the most important issue of 1992 and one that was the central theme of Women's Day as well is the implications of the new economic policy on the status of women. Besides despair and anger against the policy package, there is also fear about what it could mean for the future. The women's movement highlighted, through campaigns, seminars and the media, the effect that structural adjustment has had or will have on the lives of poor women.

Structural adjustment has always been a touchy issue. Women's representation in the organised sector is less than 10 per cent. Almost 94 per cent of working women in the country are in the informal sector. Yet, in the debate that took place this year on the exit policy, nobody is clear about what will happen to these women once they are pushed out of their jobs.

A significant development last year was the Panchayati Raj Bill, which was the culmination of a long and animated debate. I feel the Bill will have a significant impact in areas where women have been already mobilised, either through their own struggles or through active women's groups. If women were to stand for office in these regions, they will quite possibly get elected. But the point is -- and I think this aspect is worrying women activists as well -- will the women who get elected fight for women's rights? Village-level problems often concern access to common community resources. At a recent peasant women's conference in Delhi, there were many complaints about panchayats refusing women access to common land. But will having a woman as sarpanch make a difference?

AIDS, of course, was big news this year, but women expressed serious reservations about the prostitute-centred approach to controlling the disease that characterises state strategies.

This woman-as-target approach marks even the population policies of the government. While nobody talks of vasectomies any more, female contraceptives, such as Norplant, which are known to have adverse effects on the body and have been banned in several countries, are being pushed through. Unsuspecting women from the lower social strata have been made to serve as guinea-pigs, a disastrous step considering the poor health status of the average Indian woman. In 1992, women's groups made a conscious attempt to document some of these abuses and fight them.

The year proved conclusively that issues such as female foeticide or infanticide cannot be viewed in isolation or attributed to cultural attitudes alone, but must be viewed in relation to their links with poverty and hunger.


Finally, the women's movement's biggest challenge today is from a resurgence of religious revivalism. The large number of kar sevikas at Ayodhya was proof women are more easily enticed by religious fundamentalism. Women's groups have found it difficult to get the point across that all fundamentalism targets women -- their rights are the first to be flung out of the window and it's they who suffer the most from communal violence.

My overwhelming impression is that the women's movement is presently in some disarray, both within India and outside it. The movement will be immeasurably strengthened if it assesses its priorities and strategies and forges unity within its ranks.

Kumud Sharma is the director of the Centre for Women's Development Studies, Delhi.