Amending the Copyright Act to give directors, composers and musicians rights over their work has corrected a historic wrong but trouble is brewing 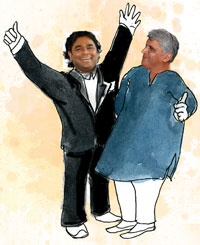 It was an opportunity for all MPs to come together and they made the most of it. There were long speeches, some mawkish, others rambling and nostalgic and much of it not germane to the issue on the table: the Copyright Act (Amendment) Bill, 2012. But MPs, cutting across party lines, were anxious to be counted on the side of the angels, in this case the artistes who have long been left out of the reckoning on royalty—lyricists, music composers, singers and film directors. After languishing in Parliament for two years, the Bill seeking amendments to the Copyright Act of 1957 suddenly found unanimous support in both Houses. The Rajya Sabha sat late into the evening to pass the Bill on May 18 and the Lok Sabha made it their main business on May 22 even though it was a last-minute listing, a surprising turnabout considering that Kapil Sibal, minister for communications and information technology, was not allowed to table it in the 2011 winter session.

Part of the change of heart could perhaps be attributed to the long campaign by Javed Akhtar, one of the big names of Bollywood, who shot to fame with his screenplays for Amitabh Bachchan films and later turned into an even more successful songwriter for Hindi films. Akhtar has been fighting for the rights of writers, lyricists, singers and composers so that these artistes get a share of the royalties for their work. It has been quite a struggle since a powerful section of the film industry, the producers— a notable opponent being Aamir Khan—and the music companies have been opposing the changes. He is now a nominated member of the Rajya Sabha and made his maiden speech with a passionate plea to fellow MPs to pass the Copyright Amendment Bill.

Parliamentarians (bless their mushy souls) dilated on the theme of famous composers and lyricists who had died in penury while the music companies had minted a fortune from their creative output. It was a good show since it made for a welcome change from the usual combative and obstructive way Parliament functions—or doesn’t. But on the specifics of the Bill they had little to contribute. So one was left wondering what their earlier opposition was all about.

The amendment makes it mandatory for broadcasters— both radio and television—to pay royalty to the owners of the copyright each time a work of art is broadcast. And rather sagely it also bans persons from bringing out cover versions of any literary, dramatic or musical work for five years from the first recording of the original creation. Some changes are curious. Copyright in a film, which currently rests with the producer for 60 years, will also vest with a director but, surprisingly, for 70 years. Why?

However, there’s much that authors/creators can revel in. Authors, or their representatives, have the right to claim damages for use of their work (while under copyright) in ways that adversely affect their reputation. Such a right can be exercised indefinitely and will not be restricted to the term of copyright as is the case now. This, though, is a worrisome provision and tends to follow the western model which has not worked too well because it could crimp the creativity and artistic expression of others who build upon an author’s work.

There is the cautionary tale of Alice Randall who faced a lawsuit for her novel, The Wind Done Gone, a political and critical parody of Margaret Mitchell’s epic of the Confederate South Gone With the Wind. The Mitchell estate sued Randall and her publisher for the novel, although the original work was long out of copyright.

But while the artistes are popping the cork, the music industry is sore. The main grouse of content owners and the International Federation of the Phonographic Industry, which represents the recording industry worldwide, is the amendment related to statutory licensing (Section 31 D) for broadcasting literary works, musical works and sound recordings. So far statutory licensing has been limited to public-owned networks but hereafter private broadcasting networks will also come in the same ambit. Music labels have a point: the broadcasting sector is owned largely by big media groups who could well exploit the section to avoid negotiating voluntary licensing arrangements. The irony, though, is that the company grumbling the loudest is a music pirate of yesteryears which exploited the work of lyricists and composers without paying them a penny. Its remix formula was a neat euphemism for brazen piracy.