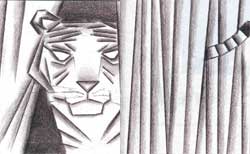 A FEW months ago, mornings at the Kanha national park began with mahouts loping off to scout the area around park headquarters for tiger spoor. After a tiger was spotted and made to settle in one spot, tourists would be brought in, 4 at a time, for a "dekho" at the striped felines. The Madhya Pradesh government banned these shows at Kanha and the Bandhavgarh national park, effective May 14, 1994, with 20-minute jumbo joyrides to replace them. What is the basis of this decision? How does it serve the cause of tiger conservation?

At Kanha, where I spent 10 months between 1992 and 1994, park visitors and staff alike are split down the middle concerning the pros and cons ofthe tiger show. But let us marsball the facts. Tiger tracking within Kanba was restricted to only 5- 10 sq km. Again, from January to May 1994, only 7 tigers were located. Of these, only I was previously unidentified. This amounts to a minuscule proportion ofthe estimated park population of tigers. Finally, tiger shows were not held every day; in 1993-94, mahouts had a 57 per cent success rate in locating tigers. In sum, the ban is valid iftaken in the interests of tiger conservation as a whole rather than for the welfare of 6-7 tigers. For this very reason, it must be supported with sound scientific research.

That is to say, what are the short- and long-term effects of the shows on tiger behaviour? The former would include changes in normal movement, hunting, mating and rearing habits. Long-term effects would be reduced survival and reproductive potential. And although Kanha's feral "stars" were arguably the most observed wild tigers in the world, there has been no systematic analysis of tiger ecology and behaviour since the shows began in the early '70s. There is no quantitative evidence regarding negative effects, only the anecdo -tal observations of the mahouts that these are minimal or absent. They recount - surprise! surprise! - how the tiger Bourra, his mother and his brother have used the elephants as screens while stalking prey. When asked about long-term effects, they may mention Bari Mata, the mother of almost all the tigershow stars, who, at 16 years of age, has successfully reared 8 litters.

There is a theory that habituated tigers may be more susceptible to poaching. This may have been a factor in the poaching incidents in Ranthambhore in 1991-92. It's a real risk, but only if the poacher is using a vehicle or an elephant, where both the human form and smell may get masked. Another wild assumption is that familiarity with humans will result in more man-eating tigers. If so, 20 years of tiger shows should have produced a veritable horde! A tiger whose territory lies partly or wholly outside a park, or 'whose kill has been stolen by locals, is likelier to turn man-eater these days.

So we are saddled with anecdotes and unproven theories. I came to Kanha again in December 1993 to record in de: behaviour and identity of the striped stars. However permission took so long in coming that the show was b shortly after I obtained my permit. Neither the state ment nor the park management evinced interest in ob behavioural data; which makes you think whether the was the result ofbureaucratic powergames: Rajesh Gopa. field director at Kanha, claims that the ban was ordered Project Tiger steering committee. But Project Tiger Arin Ghosh says that it was a state government order, bly to prevent harassment of tigers.

Almost as important as the decision itself is its imp1t tation. By dropping the ban into the lap of the tourist with nary a hint, the Madhya Pradesh government has itself of a massive public relations bloomer. Like it or tiger is probably why many tourists come to Kanha warned is less disgruntled.

Perhaps the show was destined to fail, given the ser taint of a circus act. But the ban typifies a universal go ment attitude - the "Let's scrap it before we have to do innovative thinking" approach to wildlife and park ment. In some cases, park management problems were ly attributed to the tiger show, such as the crowding Kanha car park.

Since April 1992, 1 have attended some 45 tiger shows. For Me,it is thrilling to find a wild animal trusting enough to actu in the presence of its mortal enemy. Granted that mav hanker for the gambol or the snarl, but one can 'ne cats at anything: fighting, feeding, hunting or (why .eeping. And for all its real and imagined drawbacks, the greatest gain is.the cathartic value of a tiger sighting: it power to turn a viewer into a crusader for the species.

In these times of waning tiger populations and poaching at Inle high in Madhya Pradesh, park managers must lie costs of potential disturbance to a small proportion with the benefits of increased vigilance and monitor Kanha tiger population. Ecotourism lays conserva i- the average Indian family's doorstep. Instead of ng on its supposed negative effects, ecotourism should -,idered an integral part of the conservation process.

The ban brings to mind the old adage, "Out of sight, out of The show was convincing proof that tigers are alive kc fteil in Kariba National Park. We can be dead certain that pr ins were not amongst those recovered from the town of ota- Ln early May, 1994. Now, will we ever be so certain of their fate again?