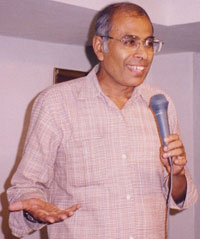 The disturbing murder of Narendra Dabholkar, rationalist campaigner and activist, is a cause for concern at many levels. It is yet another example of the extent of intolerance that our society appears to revel in. It is emblematic of the deep-seated fear of knowledge and its democratization. Most importantly, perhaps, it is a reminder that power relations in our society are mediated by institutions and individuals who have a stake in maintaining the status quo and in denying access to knowledge that can challenge prevailing belief systems.

Dabholkar was no mere armchair rationalist. He had the courage of conviction to fearlessly propagate his beliefs and to actively campaign for a change in the status quo. There lay the danger, that his beliefs constituted, to those who wanted people to unquestioningly accept their station in life.

His interest lay in not just propagating science per se but in promoting the method of science. Science today is often reduced to a set of facts, axioms and explanations, thereby stripping it of its essential core. The foundation of science is located in its method, in its endeavour to question everything that demands an explanation. This pursuit of Dabholkar led him to question practices in society, not because they were linked to any particular faith or religion, but because these practices perpetuated inequity.

The ‘anti-superstition’ Bill that Dabholkar was engaged in championing gives us a glimpse of the kind of practices that he opposed. A major portion of practices covered by the Bill relate to false claims of cures for different diseases. The Bill also sought to disbar claims regarding the ability to predict or alter the future, under the guise of astrology or other such belief systems. Millions today are prey to such claims. Their irrational belief in such claims stem from the larger conditions in society that make people vulnerable and uncertain about their future. If people have the option to make rational choices they usually do so. But in conditions where a vast majority of people are denied access to a functioning and affordable healthcare system, they turn to whatever provides hope. A majority of the people in the country face an uncertain future, brought about by the present path of development, that increases inequity and constantly pauperizes those who are already at the margins of society. Again, for people caught in the mire of destitution and uncertainty, a recourse to rituals that claim will change the future, are in fact the cry of the oppressed for a better future.

Dabholkar’s death is thus also a reminder that social conditions give rise to irrationality and those who perpetuate existing inequities will go to any lengths to preserve their dominance. Knowledge is power and denial of knowledge is another way of perpetuating the present imbalances in power relations in society. The death of a crusader wouldn’t be in vain if the promotion of rationality is integrated with the movement to challenge the fundamental unjust nature of society today, plagued by divisions based on class, caste and gender, among other things. Such divisions are as irrational as the irrational belief systems they engender. Science and rationality are powerful tools that can break the chain of coercion that is inherent in our system. For the method of science teaches us to question everything, to seek the truth, to never believe that we are privy to the ultimate truth. Dabholkar is no more but can we hope that his story will inspire a new generation of people who believe in the power of science, rationality and truth to change the way we live and the way we think?