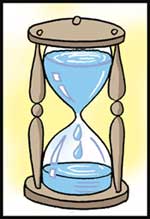 ADMINISTRATORS of urban water facilities in India often adopt a parochial view. The water suppliers discourage measures such as rainwater harvesting, arguing that it reduces their revenue by cutting down demand, especially from high-end consumers. There have been cases in Bangalore of customers being harassed by officials of the Bangalore Water Supply and Sewerage Board after they adopted rainwater harvesting. It had drastically reduced their water bills, and the babus weren't pleased at all.

Indian babus love to 'learn' from developed countries. The ones in urban water facilities should plan a junket Down Under. Energy Australia, electricity and gas supplier to over 1.4 million families in Australia, decided to send "shower timers" free to over half a million families in Sydney. They figured that the extra time spent in showers increases their annual power bill by Aus $100.While energy efficiency was the main thrust of this campaign, water usage also ties in closely. With parts of southern Australia experiencing its driest August to October period in more than 100 years, water management has aquired a sharp focus. Sydney, the capital of New South Wales, first experienced drought-like conditions in 2002. It initiated an integrated water management strategy to tackle the problem on both the supply and demand fronts.

Sydney is supplied water from 10 major dams that have a total storage capacity of 2,400 billion litres. By October 2, 2003, the dams had less than 60 per cent of their total capacity, leading to imposition of 'level one' restrictions. But storage levels plunged further, and level-two restrictions (at 49.8 per cent) and then level-three restrictions (at 40 per cent) followed.

Sprinkler use and hosing of hard surfaces was banned. Fines of Aus $220-550 were imposed for violations, with a fine of Aus $2,200 for water theft. Following this, storage levels in the dams stabilised over the past year and a half, and have actually increased as per the latest reports. While this can be attributed in part to increased rainfall, usage restrictions have definitely played a large part. Today several measures are being taken to educate and inform people about water conservation -- regardless of the water availability status.

There is a lot that a water facility can do to manage water sensibly. It involves both market solutions like adequate pricing and social solutions like treating water like a common resource. With urgency.