To villagers in Bihar, the Dunkel Draft and GATT are not proposals or agreements but a couple of angrez out to play havoc with their lives. 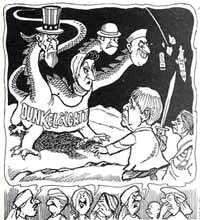 Those who took upon themselves the task of opposing the Dunkel proposals for the Uruguay round of talks have done a remarkable job. A motley band of people with little in common -- except their professed dislike for the Dunkel proposals -- have managed to carry the anti-Dunkel stand even to the remote recesses of rural India. That they have achieved this almost without any institutional or organisational support makes the feat even more impressive.

This is nowhere more evident than from the issues that dominate the conversations of farmers at their evening hangouts. These days, for instance, when farmers in north Bihar gather around bonfires, some of the most common issues that crop up are rabi prospects, the crookedness of cousins, the marriages of daughters, the excesses of other castes, the Laloo government and, of course, Dunkel-wa (a pejorative reference to the former GATT chief, Arthur Dunkel).


Actually, few of them know about GATT. Still fewer know that GATT is an acronym. In fact, a large number of people believe that Dunkel and Gatt are two "angrez" (white men) who are out to "capture" the "whole of India". Yet others are not averse to believing that these two angrez,/I> might be in cahoots with Pakistan.

There are a select few in every village who have managed to convince the audience of their qualifications to "warn in detail" their fellow villagers about the "threat".

But almost all of them end up further mystifying the ramifications of GATT, to the extent that whenever someone suggests that there is more to GATT than colonising Indian agriculture, the person's understanding of the "threat" is immediately suspect, especially when the refrain is since "big leaders from all over" (a reference to Medha Patkar and Suman Sahai who recently visited north Bihar in connection with the Dunkel controversy) are "coming to our area to warn us, there has to be some truth in it."

None of this is surprising, considering the fact that even among the educated circles in Patna or Delhi, it is opinion more than information or analysis that is being dished out. Neither the supporters of the new GATT nor its opponents have cared to present the whole picture before the nation. Organisations such as the National Working Group on Patent Laws and the Gene Campaign have rightly pulled up the Union government for keeping the whole business under wraps. However, they in turn could also be accused of not taking the whole issue to the people.


The implications of this "selective communication" goes beyond morality. Today, farmers in a significant portion of India are gripped by fear. The fear is heightened because they know so little about it. One farmer likened it to the Skylab satellite which fell from the sky a few years ago. Another, trying to assure his fellow villagers, was heard saying: "Well, it is not that they are going to drive us out of cultivation. Dunkel and GATT will now decide on the crop that a particular village can be allowed to grow. They have already made village-level allocation."

Yet another farmer felt that since Bihar chief minister Laloo Yadav is going so strong now, backward caste farmers would get all the cash crops while their upper caste counterparts would be forced to limit themselves to coarse grains. A supporter of Laloo Yadav, on the other hand, felt that it is a conspiracy by the Congress party to take revenge on Bihar after they failed to dislodge the Janata Dal government through fair means: "All the good crops will go to the Congress-ruled states."

It is obvious that little information has been made available to them. Yet, if they believe that GATT is going to play havoc with their lives, it is only because of the credibility of those who carry the message to them -- the press and the activists and campaigners who come across to them as responsible people. At the same time, there is mounting resignation among people that representatives they have elected could be trusted once again to "sell" their people. In fact, even someone as wily and seasoned as Mahendra Singh Tikait had once confessed to a colleague, "I do not really know what GATT will do. Suman Sahai and others came to me and said that it would destroy the farmers. I said, well, then I'd oppose it."

There is, however, nothing yet to suggest that the new GATT would harm all farmers. While conducting the campaign, the anti-Dunkel group has neglected to inform farmers of all the possible scenarios and then ask them to take a decision. Isn't that how decisions should be made in a democratic set up? In fact, when the likely effects of the new GATT are explained, many farmers -- particularly the big ones -- say they would have nothing against it. These are agriculturists who make high investments for higher returns. As one of them said, they already buy hybrid seeds and the latest inputs that go with it and they would not mind spending more if their produce fetches a higher price.

The crucial factor, however, is that GATT would indeed widen the divide between the rich and poor farmers. While the rich may not eventually get affected, the poor farmers will find it increasingly difficult to keep up. But if this were to be clearly articulated by the campaigners, the anti-Dunkel campaign would fall flat simply because it is the rich-farmer lobby that provides all the muscle and resources necessary for the success of any campaign in rural India. Thus, any campaigner trying to whip up a farmers' movement should make these distinctions only at a risk to the cause. It is sound politics, but what about morality?