The climate and trade tango

India has emerged as a “voice” in climate change and trade negotiations. At the recently concluded trade talks in Bali, the Indian government was insistent that the rights of poor farmers should not be compromised; in climate change it has raised the matter of equity in sharing global atmospheric space. The already industrialised countries say India is obstinate, strident and unnecessarily obstructionist in crucial global debates. The problem is not that India is loud—that it must be. There is a fundamental weakness in the rules that govern ecological and economic globalisation. In other words, the political globalisation is weak and compromised because of powerful self-interest of powerful countries. The problem, in my view, is that India is loud but not clear. It, therefore, makes noise but does not achieve its stated goal: protect the interest of the poorest in the world. 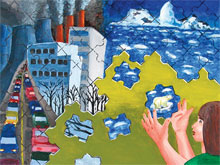 But first let us understand the two processes. It was in the early 1990s that the world first finalised the climate agreement. The UN Framework Convention on Climate Change was signed in 1992 at the Rio Conference. The climate agreement was needed because economic growth had outstripped the ecological boundaries of the planet. The stock of greenhouse gas emissions was more than what the earth’s natural cleaning system—sinks in the form of oceans, atmosphere, forests and soil—could absorb. The world needed an agreement to reduce emissions, which were the result of economic growth. But most importantly, these emissions were no longer the problem of any one country. In fact, it was clear that the levels of production and consumption had reached such a point that the actions of one country within its boundaries were going to have major and devastating impacts on other countries.

Just consider this: by then the world had learnt that a simple home refrigerator, which used a chemical called chlorofluorocarbon could literally blow a hole in the ozone layer and lead to skin cancer. Then traces of persistent organic compounds like DDT—a pesticide used for virtually everything at that time—were found in the breast milk of women living in faraway Arctic region. Ocean currents and air streams knew no national barriers and carried these chemicals across the globe.

The world was interconnected, brought together by the excesses of economic growth. So it was not good enough to set rules in individual countries to mitigate environmental damage. It was time to create new rules for a global system of environmental governance. Since then the world has stitched up many agreements, from the ones on the protection of the ozone layer and climate change to those on the management of hazardous waste, elimination of persistent organic pollutants like DDT and in 2013 on mercury use. These agreements together form the architecture for ecological globalisation.

In the 1990s another global process was under way—the setting up of the multilateral trading system under WTO. This economic globalisation would take production and consumption to new places and new levels. It would no longer be possible to live within the planetary boundaries. Instead the trading system enjoined all countries to the same pattern of growth and its toxic fallout.

This is where the world is today. It has changed and yet not changed. On the one hand, manufacturing has moved to new countries and so have greenhouse gas emissions. In 1990, industrialised countries together accounted for 70 per cent of the annual global emissions. In 2010, they accounted for 43 per cent. In 1990, China, with over a quarter of the world’s population, accounted for only 10 per cent of annual emissions. By 2012, it contributed 27 per cent. On the other hand, there has been no change in the way the world does business. The West has not reduced its obscene subsidies to its farmers. In global trade negotiations it has simply played games to move them from one box to another; renamed and reworked them. The farmers of the developing world continue to be at a huge disadvantage. Similarly, in climate negotiations, the West has not reduced its emissions, so countries like China occupied the little ecological space that was available for emissions. Now the world has run out of atmospheric space and certainly of time.

The fight is now even more contested and nasty. In climate change negotiations, the industrialised West wants to dump the 1992 agreement that required them to reduce emissions and share the atmospheric space with growing countries. They say the world has changed—emerging countries are now their competitors in trade and pollution, and they cannot make any concessions. In agriculture they want restrictions on the subsidy bill of developing countries. The just-concluded WTO meet in Bali is an indicator of the stakes involved. At this meet, the support price paid to poor farmers was considered a distortion of global trade. India was vociferous in its opposition to this. But the final Bali deal on agriculture is ambiguous and could hit the support to poor farmers. So the question is: has India been successful in fighting for the rights of the poor or has it only made loud noise? And why? Let’s discuss this next fortnight.