The future folding into itself 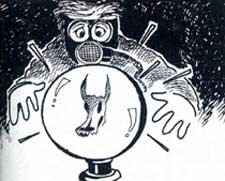 The pollen so sharp
that the wind sneezed,
its belly so speckled with rashes
that it turned visible.

The way the fish walked up the beaches
you'd think they had turned amphibian.
The fisherfolk came out, hollering;
as the women tenderly
pushed them back in the sea
saying "they are our children";
and the men asked
"what happens to our catch tomorrow?"
But at night they beached again
to rest their tired lungs
and the Lord sent an angel
to switch off the current
from the light-bulbs in their eyes.

The seals already had a virus.
As for the gulls, we starved them
as the North Sea starved them,
or fed them on poisoned fish,
or on a coastal ledge
let the spray from an oil-slick
send them fluttering
and sagging to their doom.

But mankind went about
with gas-masks,
looking like pigs,
exactly
as Nostradamus had foretold.

---Poet Keki N Daruwalla is a special secretary to the government of India.