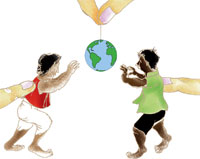 Many years ago, in a desperately poor village in Rajasthan, people decided to plant trees on the land adjoining their pond so that its catchment would be protected. But this land belonged to the revenue department and people were fined for trespass. The issue hit national headlines. The stink made the local administration uncomfortable. They then came up with a brilliant game plan—they allotted the land to a group of equally poor people. In this way the poor ended up fighting the poor. The local government got away with the deliberate murder of a water body.

I recall this episode as I watch recent developments on climate change. At the recent Durban climate change conference small island nations—from the Maldives to Granada —believed, rightly so, that the world has not delivered on its promise to cut emissions and is jeopardising their future. But they do not have the power to fight the powerful. So, this coalition of climate victims turned against its partner developing countries, targeting India, for instance, for inaction. These nations pushed for India to take legal commitments to reduce emissions, dismissing its concerns of equity as inconsequential.

The divide is complete. According to Bangladeshi climate change researcher and old friend Saleemul Huq, the issue of equity—the setting of emission targets based on the contribution of each country to the stock of carbon dioxide in the atmosphere—is an old fashioned idea. He says it will not work in the new world where the dichotomy of the rich and poor countries has vanished; instead, there are equal and big polluters like China, India, South Africa and Brazil (BASIC). These, he says, are equally responsible and must take steps to cut emissions. He wants the notion of historical emissions junked. For him, countries like the Maldives and Bangladesh are victims. India is a polluter, a rich country whose government is hiding behind the poor to avoid cutting emissions.

But the fact is Maldives’ per capita emission is higher than India’s. So, should the Maldives take mandatory emission reductions? Is it a victim or a polluter? India also has a longer coastline than vulnerable Bangladesh. Is it a polluter? Or an equal victim? Sivan Kartha, a climate change researcher with the Stockholm Environment Institute, tears into this argument that is dividing the poor world and taking the focus away from countries that need to be told to take action fast. He compares India and Africa, countering the charge that Africa is being destroyed because of rich India’s reluctance to take emission reductions. “Actually, 1.1 per cent of Africans have made it to the top global wealth decile against 0.9 per cent Indians. As against this, 21 per cent Americans are in the top global wealth decile. Then, India’s total emissions are only two-thirds of what Africa emits.” As against this, US emissions are four times India’s. In this way, while the poor fight over crumbs, the cake is eaten by the rich.

Simple plot. Sinister design. The poor have been divided to fight over who is more vulnerable. But one must realise that this divide is a deliberate creation. In 2009 at the Copenhagen Conference of Parties, two categories of countries were devised. One, vulnerable countries that would get fast track funds to adapt to climate change and two, emerging polluters grouped under the BASIC banner. The bribe and divide was blatant and successful. It was openly said in the conference plenary that polluting countries like India, who wanted an agreement based on equity, were blocking funds that would flow to Bangladesh and the Maldives. That penultimate night of the conference the poor fought the poor. Since then the divide has grown.

It’s time we stopped this kindergarten fight. Let us be clear the world has to cut emissions drastically and fast. There must be limits on each country based on its per capita emission and taking into account its historical contribution. China is the biggest current emitter. But in cumulative terms—taking into account the stock in the atmosphere accumulated over the years—it contributes 11 per cent against US share of 26 per cent. It must also be brought under limits, as must India. But these limits will have to be based on the principle of equity so that these countries will also have the right to development.

This is the most inconvenient of truths. But it is the truth.